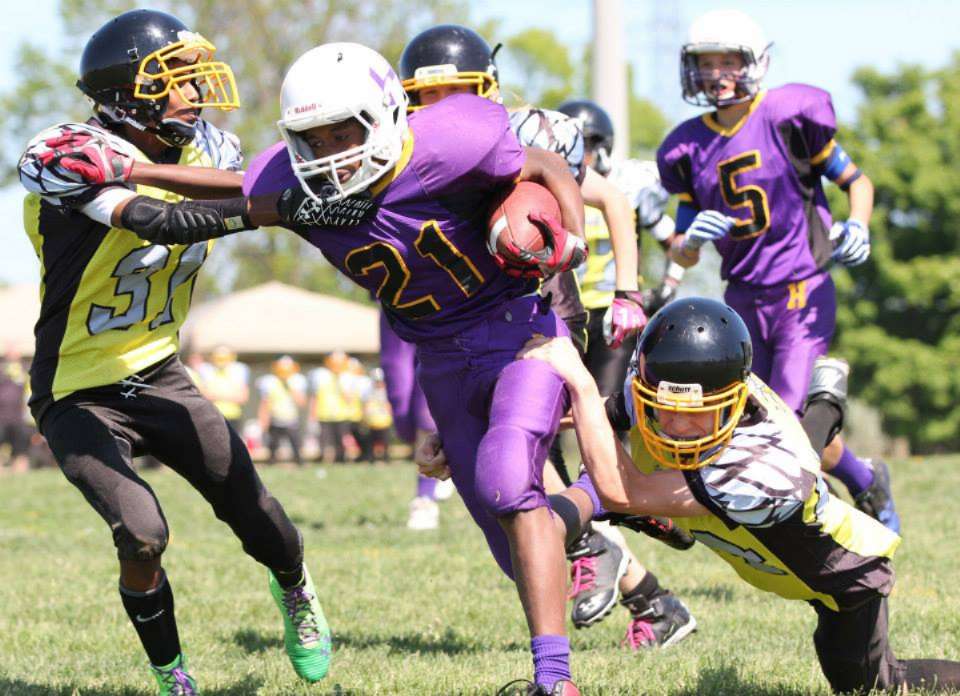 VARSITY
The Huronia Stallions Varsity team finished the regular season with a 52-7 trouncing of the Peterborough Wolverines.  The Stallions were led by a fantastic defensive effort highlighted by the establishment of a new team record of 7 interceptions in a game.  These were recorded by Dylan Martin (2), Austin Buck (2), Max Mallo, Caleb Nunes and Danthony Duchaney.  The top defensive players in the game were team captain Mack Holliday who had 5 total tackles and a sack, Brandon Johnston who had 10 total tackles with 5 coming on special teams and Jay Van Dam with 7 total tackles.  On offence, first year Varsity player Matt Howe had a breakout game with 190 rushing yards and three touchdowns on just 12 carries.  Howe’s stellar day included an explosive 70 yard touchdown run.  Wide Receiver Jayden Kelly returned to action with two touchdowns.  Unfortunately, Kelly had three touchdowns called back due to penalty.  Veteran quarterback Adam Zussino steadily directed the offence throughout the game and posted 140 passing yards on 10 of 17 attempts with 2 touchdowns and an interception.  Fullback Jake Allen also had a strong game with 78 tough yards on 10 carries.  The Stallions end the regular season with a 6-2 record earning them a home playoff game the weekend of July 25-27 against an opponent to be determined.

JUNIOR VARSITY
The Huronia Stallions Junior Varsity team had their four game winning streak snapped with a 49-13 loss to the undefeated Peterborough Wolverines.  The Stallions opened the game with a strong effort playing Peterborough to a 13-13 tie until late in the first half. They opened the scoring on fullback Hayden Greely’s three yard touchdown and kept pace with the powerful Peterborough offence with two Jacob Tanguay field goals.  Unfortunately, Peterborough capitalized with two late first down touchdowns on two Stallions’ fumbles in their own end.  The Wolverines kept this momentum going in the second half to cruise to the victory.  The Stallions were led on offence by quarterback Josh Cook who marched the Stallions down the field throughout the game.  The offence’s second half efforts were often negated however by penalties or turnovers.  The Stallions defensive line led by Jacob Johnson had a strong game limiting the rushing of Patrick Person; the talented Peterborough quarterback.  Person could not be contained all game and made enough big plays to keep the Stallions at bay.  Jacob Tanguay once again had a strong game with several pass receptions despite receiving double coverage for most of the game.  The Stallions advance to the playoffs the weekend of July 25-27 and will travel to Clarington to take on the second place Knights.

Bantam
The Huronia Stallions Bantam Team concluded the regular season with a 29-6 victory over the Clarington Knights.  Two-way player Kail Dava had an outstanding game scoring the game’s opening touchdown on a reception, tallying 3 other key receptions and having 3 quarterback sacks and a forced fumble on defence.  Quarterbacks Nick Dejesus and Chase Waddick combined for three total touchdown passes.  Receiver Mike Tomczyk had a strong game with two touchdown receptions.  Issichar Sookwah scored a rushing touchdown and Aiden Nicoletta kicked a field goal to round out the scoring. The offensive line was led by the effort of second year bantam guard Joshua Carr. Defensively the Stallions put forth a great effort forcing several turnovers on the day and holding the Knights offense to under 100 total yards. The Bantam team finishes the season with a 6-2 record and a second place finish in their division.  They will host Oakville in the first round of the playoffs at a date and time yet to be determined.