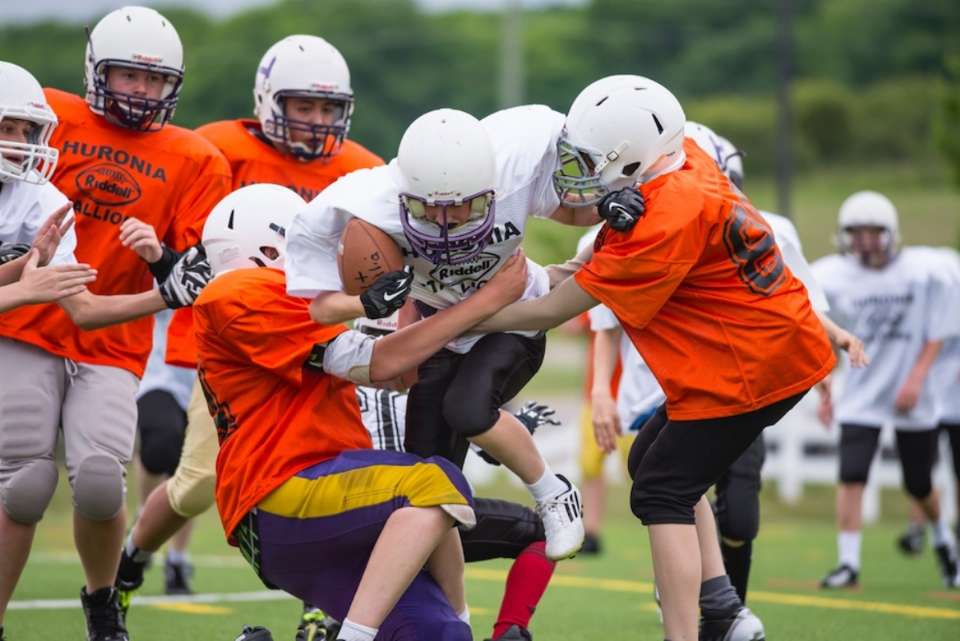 The Huronia Stallions Varsity team fell to 2-1 on the season with a 37-14 defeat against the Peterborough Wolverines.  This is the first time Peterborough has defeated Huronia at the Varsity level since the Stallions joined the OFC in 2011.

The Stallions offence started with a couple of first downs and some badly need pass completions.  This early success soon faded as they lost Quarterback Josh Cook to injury and found themselves trailing 17-1 at halftime.  Wide Receiver Nick Stadnyk then scored an electrifying 69 yard touchdown run on a reverse.  The talented receiver then followed that effort with a 25 yard touchdown reception from backup Quarterback Brandon Longstreet which pulled the Stallions within 3 points of the Wolverines.  However, that would be as close as they would get due to two significant fourth quarter miscues; a missed field and failed 3rd down conversation at the Peterborough 18 yard line.

What the game really came down to was Peterborough’s ability to stymie Huronia’s consistently reliable rushing attack.  Indicative of this shutdown performance is how All-Star Tailback Matt Howe finished the game with a paltry 24 yards on 10 carries. The Stallions defence once again kept the team in the game until the fourth quarter before they wore down against the Peterborough run game.  The Wolverines were able to convert several 3rd down and inches and 3rd and goal situations to put the game out of reach.  When the final whistle blew Peterborough Runningback Devon MacCallum had totaled a whopping 248 yards on 31 carries.

The top Stallions player was JV call up Kayden Peters who continued to improve and impress leading the team in tackles and posting his second interception of the season.  The Stallions will seek to right the ship this Saturday on the road against a very tough squad from North Halton.

The Huronia Stallions Junior Varsity team fell to 1-2 on the season with a hard fought 34-0 loss to the Peterborough Wolverines.  This group of Stallions with only 7 returning players and 50 rookies were determined to have a better showing than the previous week in Oakville.  The players were reminded of the Stallion tradition of always working harder than their opponent regardless of the score.  The first half was a defensive battle that saw Peterborough gain a slight edge with a 14-0 lead.

The Stallions had opportunities to score but failed to execute once in Peterborough territory.  The Wolverines also consistently outplayed Huronia in the kicking game.  This left the Stallions with poor field position throughout the game.  With Huronia still down only 14-0 in the fourth quarter, the Stallions offence marched to the Peterborough 3 yard line with a chance to cut the lead in half.  Unfortunately, disaster struck as a costly fumble thwarted the Stallions scoring effort.  Peterborough then responded with 20 unanswered points in the final 9 minutes to seize the victory.

The Stallions will look to continue their improvement this Saturday in North Halton.

The Huronia Stallions Bantam team improved to 2-1 on the season with a 36-6 Friday night lights victory over the previously unbeaten Vaughn Rebels.  Vaughn seized the momentum early by scoring on a long touchdown play to take a 6-0 lead.

The Stallions defence shut down Vaughn after the lone early score.  The unit was led by Gavin Wallin who registered 13 tackles and a forced fumble and the strong play of Devonte White and Saeed Khan.

The Bantam squad will look to improve to 3-1 on the year Saturday in North Halton.