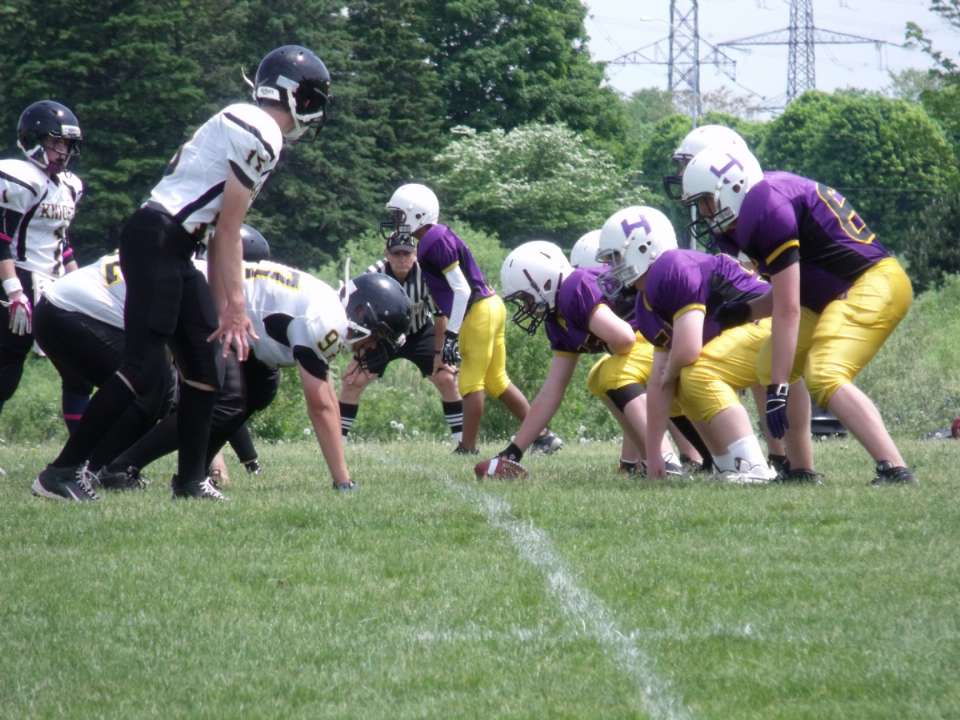 The Huronia Stallions Varsity Football team lost a dramatic 13-12 decision to the Twin City Predators this weekend.  The Stallions had been waiting for the opportunity to take on the Preds since they lost a one sided contest in last season’s Championship Game.  The Stallions took a 12-0 lead to the locker room at halftime despite squandering several scoring opportunities including missing two extra point attempts.  The Stallions defence played fantastic football in the second half with two key third down stops and two interceptions by Johnny Obdam and Brandon Johnston.  Meanwhile the Stallions offence had two glorious chances to score but they threw an interception in the endzone with a first and goal at the nine and were stuffed on 2nd and 3rd and goal from the one.  The Predators won the game with a 109 yard drive for a touchdown off the endzone stop and a late fourth quarter td that dropped the Stallions to 4-2 on the season.  Defensive End Brett Ferrari was the top player of the game with his finest individual effort in a Stallions uniform.  Ferrari had three Quarterback Sacks and 7 total tackles in an inspired performance.  This Saturday at 6:30 the Stallions take on the Clarington Knights in a very special game at the Barrie Sports Complex in Midhurst.  The Stallions will introduce and honour their all 20 year team at halftime with a reunion social to follow.  All former players, coaches, parents and supporters are invited.

The Huronia Stallions Bantam Football team won a convincing 38-1 decision over the Toronto Junior Argos this weekend.  This win secured the team with the final berth in the playoffs with one game remaining.  Alex Goldritch had two rushing touchdowns with several long scampers.  Jason Bangarol and Jacob Cliché both caught two touchdown passes.  Jacob Tanguay-Sauve kicked a field goal and converted all five extra point attempts.  The Varsity team could have used his talents this weekend.  Defensively, Christian Hutter-Coppin, Ryley Leech and Zac Guymer-Jacobs had strong games.  Next up is a trip to Burlington this Sunday.