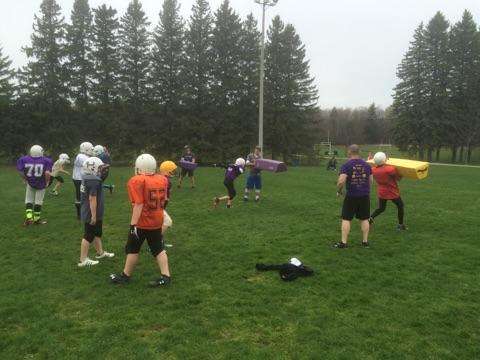 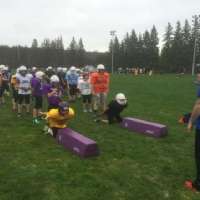 The Huronia Stallions Football Club opens the season with a triple header against Vaughn at York University this weekend.  Action begins at 2pm with the Bantams, followed by the JVs at 5pm and the Varsity team at 7:30pm.

Last season the Huronia Stallions Varsity team finished 5-3 on the regular season but were eliminated in the playoffs in a hard fought game against Peterborough.  This was the first time in four seasons that the Stallions did not win the Northern Division Championship.  The Stallions have a very good veteran squad this season despite a lack of depth at several key positions.  The two key strengths of the team heading into the season are the defence and the offensive line.  Defensive Back and Special Teams player Christian Hutter-Coppin was described by Head Coach, Martino DiSabatino as the “team Leader.”  The defense also features dynamic linebacker Datun Aketepe who should wreak havoc on opposing offences all season.  Veteran Defensive Back Tyler Maher also had a strong training camp and is poised for another strong season.  Mitchell Stadnyk is JV age and will be moving up to Varsity full time.  Young Defensive End Zach Willems was described by Coach DiSabatino as a “gem” who should be a key contributor this season.  The offensive line expertly coached by Jeff Hale, an All-Canadian and Vanier Cup Champion at the University of Guelph, is much improved this year with several solid veterans.  These include “Big Mike” McKean, Dillon Hart, Matt Gordon (2013-Present) and Terry Hart (2013-Present).  An intriguing prospect on the line is rookie Spencer McNamara who has the potential to be an outstanding player.  The team also returns starting quarterback Brandon “The General” Longstreet who made significant strides last season.

The Huronia Stallions Junior Varsity team may be the best JV squad the Stallions have fielded since the 2004-2006 editions which advanced to three straight Championship games and captured two titles.  The Stallions are solid at quarterback with two players vying to start.  These are incumbent Justin Wynn who is fresh off of leading Joan of Arc to a high school championship and Nicholas DeJesus who starred for the Bantam Stallions over the past two years.  Perhaps the most talented JV player is Linebacker Charlie Doering who was described by Coach DiSabatino as the “second best linebacker in the entire system.”  The Stallions coaches have a tough decision whether Doering will move up to Varsity this season or remain as the leader of the JV squad.  Another defensive standout heading into the season is Rush End Aidan Alfieri.  On the offensive line, Brady Smith has had an outstanding training camp and has demonstrated toughness and controlled aggression.  One of the keys to the Stallions organizational success is the structure of the program and the consistency in the coaching staff; many of whom are former players.  The Varsity and Junior Varsity teams practice together and have a common coaching staff.  This gives the players five potential years of playing in the same system with the same coaches.  This year’s staff includes the following coaches and their years of service coaching the Varsity Program.  Martino DiSabatino (1993 to present), Jeff Hale (2005-present), Chris Forde (1994, 2005-Present), Johnny Obdam (2013-Present) Nikola Alves (2011-Present), Jesse Alves (2015-Present), and Tivon Cook (2015-Present).

The Huronia Stallions Bantam team is in rebuilding mode after graduating several key players from last season’s North Division Championship squad.  The team is led by new Head Coach Craig Hepditch who has coached for five seasons in the program.