Program about more than just athletics 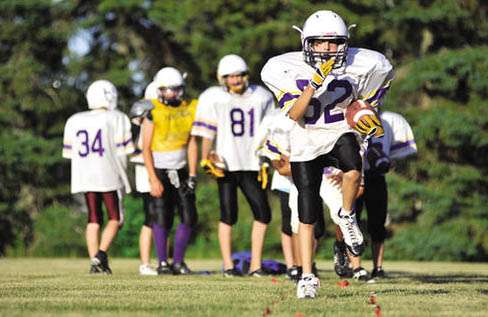 Twenty years ago, Mississauga's Ray Roach, the late Gord Carey, of Oshawa, and Martino DiSabatino, of Huronia, banded together to form a summer football league for players 19 and younger.

Also helping in the founding of the Stallions in 1993 were Jim Raycroft, Jack Duffy, Wayne Scott, Carol Romero and John Roach.

Prior to 1993, there was only a fall league in Ottawa for high school-aged children.

The original Great Lakes Football League had only three teams in 1993.

Today, there are dozens of summer football programs in every urban centte from Sault St. Marie to Windsor to Ottawa. Most offer programs for kids between the ages of seven and 19, with many cities able to host multiple teams.

Leagues such as the Ontario Varsity Football League and the Ontario Football Conference offer the highest level of competition in the province for high school-aged players.

Player development has been extraordinary as seasons last for three months plus playoffs and players can learn and grow in the same system for several years.

Often, summer programs are able to organize full coaching staffs. The impact on football in Canada is tremendous. Not only have summer football programs developed players, they have also developed high-level coaches.

With the Huronia Stallions, the varsity and junior varsity teams typically have between eight and 10 coaches. The Stallions have developed several coaches who went on to play university football and return each summer to give back to the program and coach the team.

Today, we’re seeing the graduates of Ontario summer football in the CFL, NFL, CIS and NCAA.

Many of the young stars in the CFL developed their skills and talents through years of summer league football. The various leagues throughout the years have also contributed players

to Team Canada and Team Ontario, which competes against other provinces each July in a national tournament.

The 19-and-under Team Canada has defeated the United States in competition on several occasions to capture the world championship with several players coming from Ontario summer league programs.

Kaczur won two Super Bowl rings with the New England Patriots and Atogwe is the starting strong safety for the Washington Redskins.

Locally in Barrie, former Stallions player Adam Rogers is with the Hamilton Tiger-Cats and spent two seasons with the Edmonton Eskimos.

One of the most remarkable recent stories, though, is that of Will Finch (Burlington Stampeders), who started for Team Canada at the men’s world football championship as a Grade 12 student.

Pat Sheahan, head coach of Queen’s University, congratulated the Huronia Stallions on the organization’s 20th anniversary and contribution to summer football in Ontario.

“Your program has produced numerous players who have moved on to new frontiers with great success,” Sheahan said. “I would further congratulate all community programs for the continuing efforts to elevate the game of football in our province. Summer football has infused energy into youth football in extraordinary fashion.

“The game in Ontario is better because of the collective efforts of you and your colleagues.”

The Argos organization also understands the importance of summer football on the CFL and the sports in general.

“Local Ontario summer football leagues offer kids an opportunity to not just play football, but uncover core values that can help youth develop into model citizens,” the league said in a statement. “Often times, the work ethic they forge from football translates into their personal lives and helps them in their jobs and in their future.

“It’s the exceptional work of the volunteer coaches and staff in the summer leagues that rubs off on the youth and helps them to understand that they are improving more than just their athletic ability.”

Over the years, the Argonauts have relied on football players from local summer leagues to fill important roster positions.

With approximately 15,000 young athletes involved in summer football programs the impact of Canadian talent in both university and professional football will continue to grow in the future.

This year marks the 20th season for the Huronia Stallions. Assistant coach Jason Romisher, the Stallions’ media and recruiting co-ordinator, will be outlining the football program and what it has meant to the Barrie area.