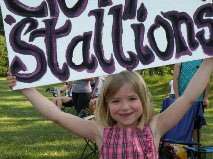 The Huronia Stallions Football Club is celebrating their 20th season this summer and have a trio of games this Saturday at the Barrie Sports Complex in Midhurst.  At 1 Pm the Bantams take on Peterborough, followed by a 430 Junior Varsity tilt also against Peterborough and an 8 PM game against the Toronto Junior Argos.  In between games, the Stallions House League Developmental program will be in action to entertain the crowd.  In all there will be close to 400 athletes age 7-18 from the Stallions stable in action.  All alumni and supporters are cordially invited to this showcase.  Results from last weekend’s games are as follows.

VARSITY
The Huronia Stallions Varsity team blew a 27-7 lead and fell to 2-1 on the season after losing to Sudbury 44-41.  Wide Receiver and Kick Returner Justin Alexander is the first player in Stallions history to catch a touchdown pass, return a punt for a touchdown and return a kickoff for a touchdown in the same game.  Alexander’s two returns were each 100 yards and he caught 4 passes for 80 yards.  Quarterback Tivon Cook continued to play extremely well with 21 completions on 38 attempts for 343 yards, two passing touchdowns and two rushing touchdowns.  Connor Maxwell was the top receiver with 10 receptions for 188 yards and a touchdown.  Tailback John Shields was the leading rusher with 11 carries for 88 yards.  Unfortunately, the Stallions also made fatal special teams mistakes as they fumbled a field goal try and yielded three special teams touchdowns.  Linebacker Zach Keough led the defence with 7 tackles and Cornerback Wes Burbidge had an interception.

JUNIOR VARSITY
The Huronia Stallions Junior Varsity team won a thrilling see saw game over Chatham 36-29.  Tailback Matt Howe had a phenomenal game with 196 rushing yards and four rushing touchdowns.  Dylan Beck caught the winning touchdown pass with just under a minute remaining.  The defence then had a huge fourth down stop to thwart the Chatham comeback.  Caleb Nunes and Terrel Cook had clutch interceptions on defence to contribute to the win.

BANTAM
The Huronia Stallions Bantam team played a strong game against Twin Cities but ultimately fell to 0-3 on the season after a 27-12 defeat.  The Stallions stormed out of the gate early after recovering the opening kickoff and converted it for a touchdown on a fine run by Alex Goldrich.  Twin Cities then responded with two touchdowns to take a 12-6 lead.  The Stallions had three more first half possessions in the red zone but failed to come up with any points.   The Stallions committed several turnovers in the second half and could not capitalize on a Zac Creamer touchdown run to seize the victory.  The Defence was led once again by Jack Schneider and Jacob Johnson