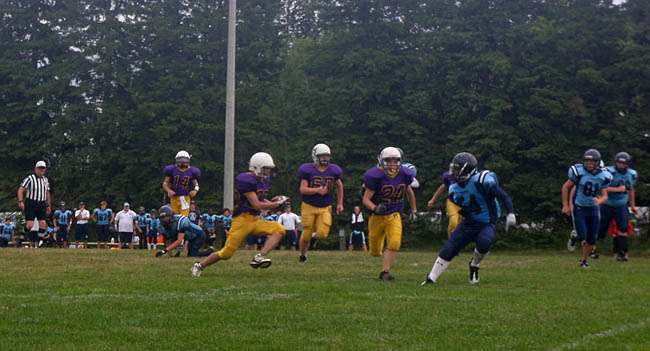 The Huronia Stallions Varsity Football team crushed Sudbury 52-17.  The win evened the Stallions record to 2-2 and avenged a 41-22 loss to Sudbury earlier in the season.  Quarterback Tivon Cook had a breakout performance with 333 yards passing and 5 touchdown passes.  Dan Vandervoort had 3 touchdown receptions and Justin Alexander and Conner Maxwell grabbed the other aerial strikes.  On the ground, tailback Gary Smith had 111 yards and Fullback Justin Gleben rumbled for 75 tough yards and 2 touchdowns.  Defensive Back Dylan Farrington led the defence with another strong game posting 9 solo tackles.  Defensive Back Jordan Bodnaruk and Linebacker Zach Hellreich also had stellar defensive performances.  Linebacker Tyler Butler was the top special teams player with several tackles on punt and kickoff coverage.  The Stallions next game is this Saturday at 6:30 against the Burlington Stampeders at the Barrie Sports Complex.

The Huronia Stallions Junior Varsity Football team continued their romp through the regular season with a 50-7 victory over the Twin City Predators.  The Stallions jumped out to an early 21-0 lead and then coasted through the finish with their younger players continuing the momentum.  The Offensive Line was dominating all day opening holes for runningbacks Sam Nieuwhof, Mackenzie Reed, Jaden Kelly, John Shields and Colton Spatero who all rushed for touchdowns.  Linebacker Tyler Dekkers had two interceptions, one of which he took the distance for a score.  Eric Methot and Mitchell Hooper also had strong games.  The Stallions next game is this Saturday at 2:30 against the undefeated Burlington Stampeders at the Barrie Sports Complex.

The Huronia Stallions Bantam Football team improved their record to 2-3 on the season with a 64-0 victory over the Toronto Junior Argos.  William Pullen scored 3 touchdowns, Matt Howe had 2, and Brandon Boomhower, Riley Leech and Josh Collinders all added scores.  On defence, Terrell Cook had a spectacular 93 yard interception return for a touchdown.  Huronia took control of the play from the outset and never looked back.  A strong offensive game was a result of great offensive line play.  The line was dominanat in the run game and provided the necessary protecttion to allow QB Brad Geurgis to connect with several different receivers throughout the game.  Defensively the Stallions played a virtually perfect game.  Several tackles for losses and sacks left Toronto is 3rd and long situations all day.  Defensive standouts included DE Jacob Johnson, Terrell Cook, Fraser Cook, and Randy Szajko.  The Stallions next game is this Sunday at 1 PM against London at the Barrie Sports Complex.