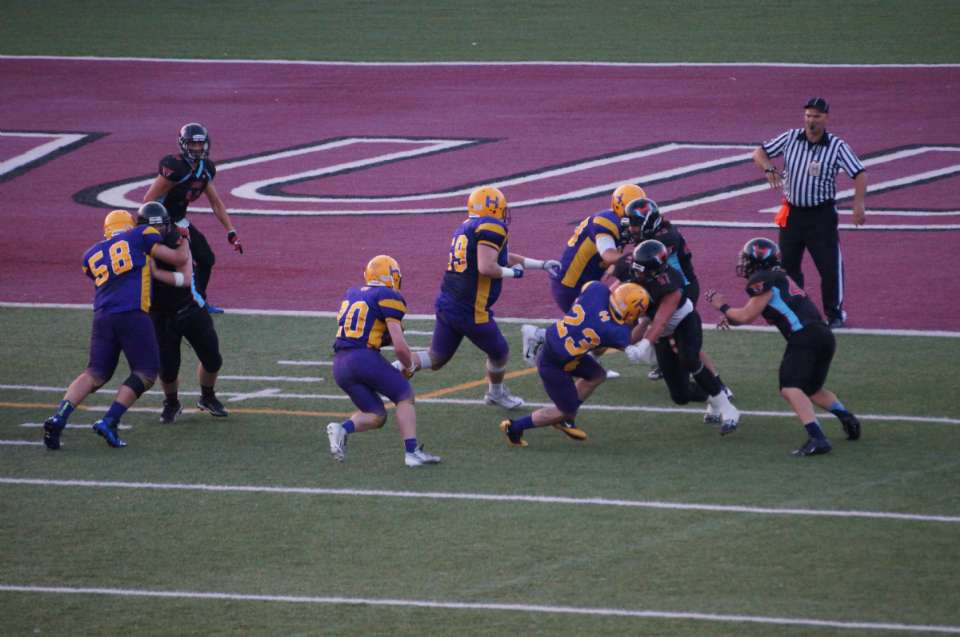 The Huronia Stallions Varsity Football team took on the Hamilton Hurricanes this Saturday in the Ontario Football Conference Championship game.  The game was a rematch of last year’s final which saw the Stallions lose a 24-21 decision in a very dramatic contest.  The Stallions entered the game as heavy underdogs as Hamilton was undefeated with an offence that averaged 44 points a game.  The game started slowly with both teams playing strong defence.  Hamilton then put together a drive deep into Huronia territory but the Stallions defence was able to limit Hamilton to a field goal.

The Stallions then began to establish a ground game led by rookie tailback Matt Howe.  Howe became the workhorse of the Stallions offence late in the season and was coming off a 204 yard performance in the Conference title game.  Howe led by All-Star linemen Lorand Szotyori and Mateo Bertucci and all-Star fullback John Shields rumbled through the stout Hamilton defence for 140 yards in the first half.  This finally translated into points when Howe was able to punch through the left side of the Hamilton defence on back to back carries hitting the endzone for a 7-3 Stallions lead midway through the second quarter.  Quarterback Adam Zussino who was named Conference MVP and All-Star quarterback did a great job extending drives with his legs and eluded heavy pressure to boot a spectacular punt on the run to save his team from ruinous field position.  Zussino would be named Special Teams Player of the Game for his punting efforts.

In the final minutes of the first half the Stallions offence was guided by Zussino and sparked by a long Howe run deep into Hamilton territory.  Zussino then lofted a fade route into the endzone to all-star receiver Jesse Alves for a touchdown and an apparent 14-3 lead.  However, the touchdown was called back for offensive pass interference and the Stallions took an unsportsmanlike conduct penalty to boot.  The 25 yards in penalties pushed the Stallions out of field goal range and gave Hamilton a big boost in momentum entering halftime.

The third quarter was all Hamilton.  On the Stallions first play from scrimmage, Howe went down with an ankle injury.  He would return to the game but was ineffective due to the injury.  Hamilton was fired up and made plays on both sides of the ball to surge to a 10-7 lead.  The Stallions defence fought valiantly to keep their team in the game.  They yielded an early fourth quarter field goal which extended the deficit to 10 points.  Defensive back Austin Currie then made an incredible play by stripping the ball from a receiver headed out of bounds and securing possession before his momentum took him to the sidelines.

This play gave the Stallions life in the final minutes.  In his final Stallions game, Adam Zussino then marched the Stallions the length of the field.  Unfortunately they could not punch in a touchdown and replicate last year’s drama with a last minute onside kick attempt.

The game ended with Hamilton again hoisting the Championship trophy with a 17-7 victory.  The Stallions defence played an incredible game holding Hamilton to just 17 points.  This reflects the outstanding game plan designed by Defensive Coordinator Taylor Shadgett and the execution of his personnel.  Tyler Dekkers and all-star Brandon Johnston were the top defensive players in the game.  Defensive back Max Malo had an interception and Defensive End Jay Van Dam scooped up a fumble recovery to round out the defensive highlights.  The Stallions graduate 15 players who had an exceptional run together, which included three Varsity Northern Conference titles and one Junior Varsity Conference title.

These players continued the Stallions tradition of excellence and should be extremely proud of everything they accomplished together.  Returning All-Stars, Mateo Bertucci, Nick Stadnyk and Jayden Kelly along with Matt Howe will be tasked with leading the 2015 Huronia Stallions without their venerated graduating teammates.