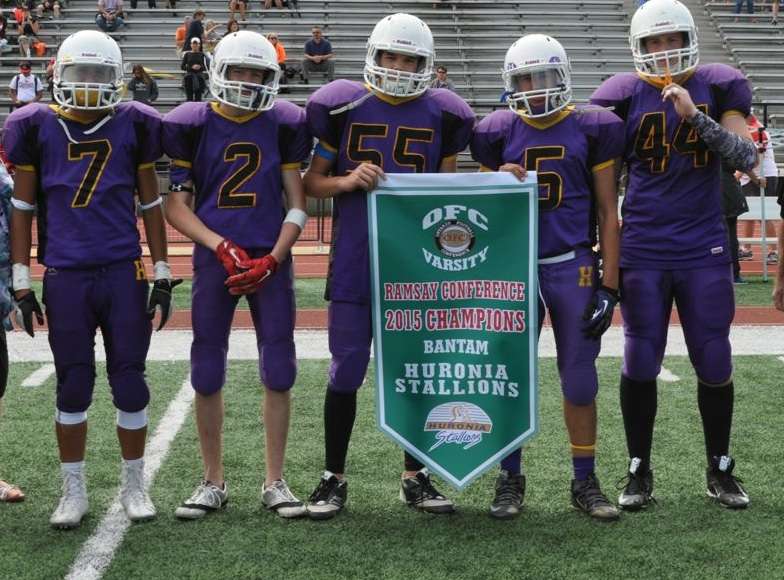 The Huronia Stallions bantam team riding an 8 game win streak went off to Guelph to take on Burlington in the Ontario Football Confrence championship game. The game got off to a rocky start when Burlington’s Jacob Adair took back the opening kickoff for a score. The Stallions usually sharp offence, which averaged over 40 points per game so far this season, had some uncharacteristic miscues resulting in 2 turnovers and multiple 4th down stops by the Burlington defense.

Stallions Quarterback Nicholas DeJesus who had a great season with 27 total touchdowns in 8 games played; added 3 passing touchdowns and 290 total yards in the game. Will McCulloch had two touchdown grabs, and Brandyn Talbot snagged the other. Gavin Wallin led the defense with multiple highlight reel hits.

Burlington’s ground game was too much for the stallions to handle as they had over 300 yards on the ground in the contest led by Niklas Sadanoja who had 190 and 3 touchdowns. Burlington linebacker Zach Ihasz had a big afternoon winning defensive player of the game capped with a 90-yard defensive touchdown to slam the breaks on any hope of a Stallions comeback. The final score was 57-18 for Burlington giving them a 4th straight OFC title at the bantam division.

That wraps up the Huronia Stallions seasons at each age group for this summer. The organization enjoyed another successful year and the Stallions family looks forward to watching the graduating varsity players begin their CIS careers, along with the other alumni playing football this fall.