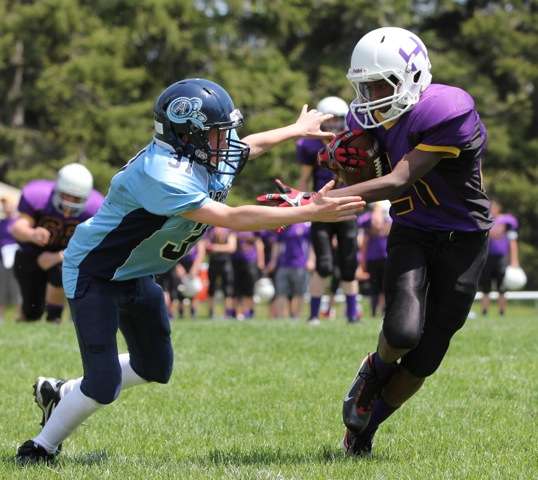 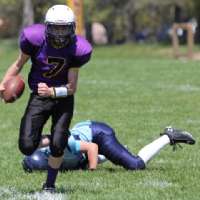 
The Huronia Stallions Varsity Football Team defeated the Oakville Titans 40-9.  Veteran quarterback Adam Zussino led the offence with 14 completions on 20 attempts for 296 yards, 3 passing touchdowns and another rushing.  Jayden Kelly was the top receiver with 3 big play receptions for 115 yards and 2 touchdowns.  In his first Varsity game after a standout Junior Varsity career, Nick Stadnyk had 70 yards and a touchdown on five receptions.  Veteran tailback John Shields and Matt Howe combined for over 100 yards rushing.  Howe scored his first Varsity touchdown and is another Varsity rookie who excelled in Junior Varsity.  Brandon Johnston led the defence with ten total tackles.  Johnston is entering his third season as the starting Varsity safety.  Defensive back Caleb Nunes had an impressive game with 6 total tackles.  Veteran R.J. Folz and Former Junior Varsity standout, Fraser Olsen both contributed 2 quarterback sacks.  The Stallions had 8 sacks total in the game which completely denied Oakville any chance of a victory.  The Stallions travel to Burlington this Sunday in an early season showdown of the league’s elite franchises.

The Huronia Stallions Junior Varsity Football Team opened the season with a dramatic 17-14 victory over Oakville.  The Stallions squandered several opportunities to score points in the first half but managed to lead 10-0 at halftime.  Oakville countered with two second half touchdowns to take a 14-10 lead.  The Stallions managed to drive the field on the final possession where with 8 seconds left quarterback Josh Cook connected with Tristan Huber in the endzone for the game winning touchdown.  Jacob Tanguay had an outstanding game with a field goal, rushing touchdown and several booming punts that buried Oakville with bad field position all game.  The Stallions are on the road this weekend where they will have a stern test against a much improved Clarington team.

The Huronia Stallions Bantam Football Team opened the season with a convincing 40-6 victory over the Toronto Jr. Argos.  The Stallions seized momentum right away with a long kickoff return followed by a touchdown two plays later.  The offence was led by Justin Janicki who had two long touchdown runs.  Issicar Sookwah and Mitchell Stadnyk also rushed for scores.  Quarterback Chase Waddick threw a touchdown pass to Evan Harkness to round out the offensive highlights.  On defence, Kail Dava scooped up a fumble and returned it for a touchdown.  Elijah Pace, Aiden Nicoletta and Charlie Doering all had strong games on defence.  The Special Teams was led by Punter Mike Tomczyk who had an outstanding game.  The Stallions host the Vaughn Rebels this Friday at 8 PM under the lights in a game that will be televised by Rogers television.

The Stallions will be participating in the Tackle Hunger Program this Friday at the Barrie Sports Complex in Midhurst.  All players and fans attending the Bantam game, House League games or Rep Team practices are encouraged to bring a non-perishable food item which will be donated to local food banks.