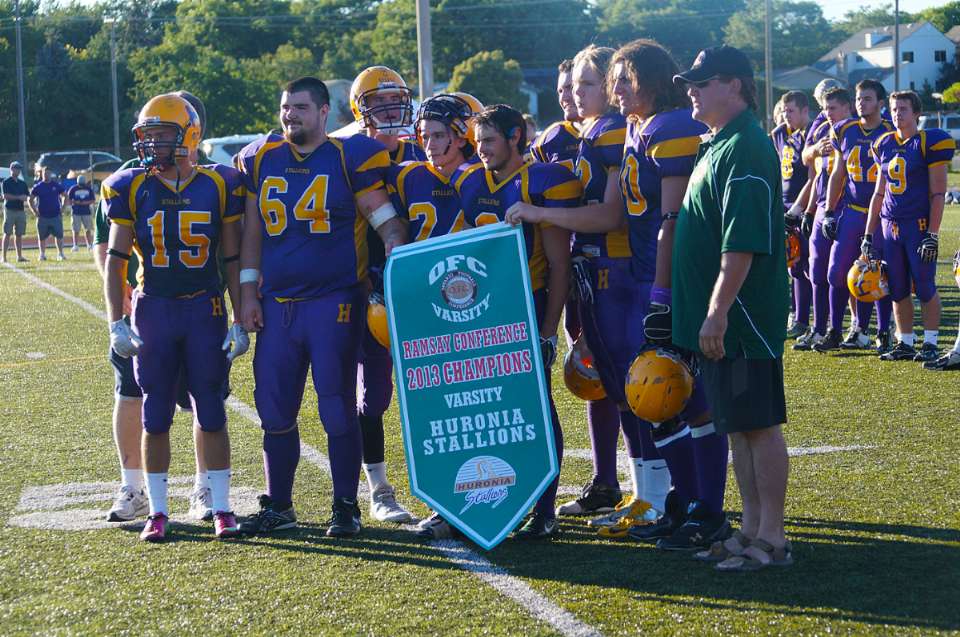 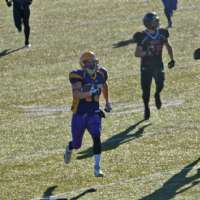 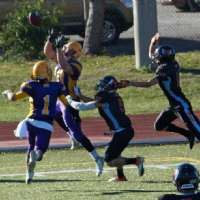 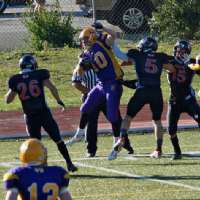 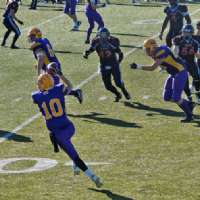 The Huronia Stallions and Hamilton Hurricances both entered the OFC Championship game undefeated with Hamilton seen by most league observers as an overwhelming favourite.  The Stallions showed their nerves at the start of the game playing shaky football on offence and failing to move the ball on their first four drives.  Hamilton capitalized going up 1-0 on a missed field goal.  On Hamilton’s next possession they drove into field goal range again where they were stopped by the Stallions defence.  However, an unsportsmanlike conduct penalty continued the drive, leading to a touchdown and an 8-0 Hamilton advantage.

The Stallions stormed back and seized the momentum with a 6 yard Adam Zussino to Mackenzie Reed touchdown.  Linebacker Ryan Gallagher had an outstanding game with 2 first half interceptions that held the vaunted Hamilton offence at bay for most of the second quarter.  Hamilton was able to add a field goal with one minute remaining to take an 11-7 advantage.

Wide Receiver Dan Vandervoort then made one of several spectacular plays in the game with a jumping/twisting 39 yard reception that put the Stallions into field goal range with just 2 seconds remaining in the half.  Andrew Drysdale nailed the field goal attempt to bring the score to 11-10 Hamilton at halftime.

The Stallions started the third quarter with Vandervoort recovering a Drysdale onside kick.  However, the Stallions were unable to capitalize.  Hamilton then drove the length of the field with a power running game that shredded the Huronia front 7 to take an 18-10 lead.  The Stallions then put together a few first downs advancing into Hamilton territory before turning it over on a trick play.  Hamilton then managed to regain the field position edge forcing the Stallions to concede a safety.

Down 10 points part way through the fourth quarter, Vandervoort ran a reverse and broke several tackles for a explosive 40 yard gain.  This play set up tailback John Shield’s one-yard touchdown run which closed the gap to 20-17.   Hamilton responded with an impressive drive to take a 10 point lead in the dying minutes of the game.  However, Vandervoort refused to accept defeat and continued his relentless play by catching a wide receiver screen that resulted in an unbelievable 63 yard reverse field run.  A Pass interference penalty got the Stallions back to the 1 yard line where Zussino rushed for a touchdown to close the gap to 27-24.  With the crowd on their feet, the Stallions lined up for the onside kick attempt having already recovered two in the game.  Unfortunately, the clock struck midnight on the Stallions championship dreams as Hamilton secured possession of the kick and ran out the clock on the final play of the game for a dramatic 27-24 victory.

The Stallions coaches and players were devastated after coming so close to their first Varsity championship since 1993 and suffering their third consecutive title game defeat.  Defensive End Hayden Hughes was named the Stallions defensive MVP of the game for his disruptive efforts rushing the passer.  Quarterback Adam Zussino had a strong game completing 12 of 18 passes for 243 yards.  Tailback John Shields also picked up 59 tough yards on 12 carries.  However, it was the play of Vandervoort that left everyone in the crowd amazed.

Former Stallions Defensive Coordinator Rocco DiSabatino called Vandervoort’s effort “the greatest single game performance by a Huronia Stallion.”  DiSabatino added that Vandervoort may be the greatest player to ever don a Stallions uniform.  This is high praise considering how many great players have worn the purple and gold over the last 21 years.  Vandervoort posted a truly remarkable statline posting 6 receptions for 178 yards and adding 40 yards rushing.  He has played in the Stallions system for over 12 years and is poised to make an immediate impact at MacMaster University this fall.

The Stallions will enter 2014 looking to reach just a little higher.  The team returns several key starters and will be bolstered by some impressive Junior Varsity graduates.  Reflecting on the game, Defensive Coordinator Andy Algar emotionally stated, “I’m proud of each and every player for a great season…losing the Championship was tough and hurt but we need to build from that and come back next year to take care of that unfinished business.”

The Huronia Stallions players, coaches and support staff contributed to a remarkable 2013 campaign that did their fans and alumni proud.