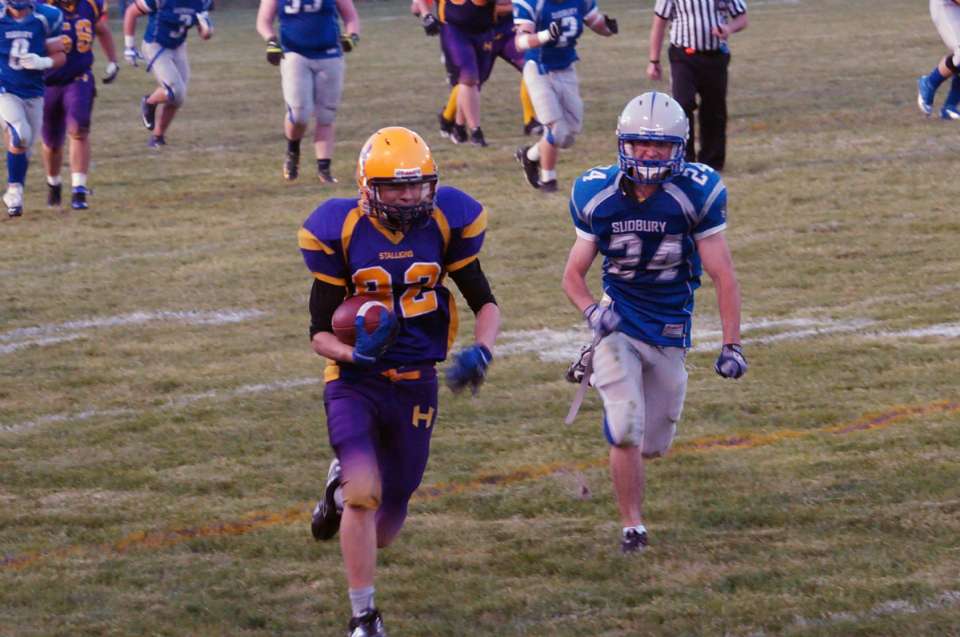 The Huronia Stallions Varsity team won a hard-fought defensive struggle 8-5 over the visiting Sudbury Gladiators.  Despite not scoring an offensive touchdown for the first time in several years, the Stallions managed to eek out the victory on the strength of a terrific defensive effort.

The Stallions were deep in Sudbury territory for most of the first quarter but failed to score any points.  In the second half, Sudbury managed just 3 points on four trips in the Stallions red zone.

Individual highlights include Linebacker Tyler Dekkers clutch interception in the first quarter after the Stallions were backed up after a bad snap.  D’anthony Duhaney and Christian Hutter-Coppin also had interceptions for the defence.  Rookie linebacker Datun Aketepe led the defence with 3 solo tackles, 3 assists, a batted ball and quarterback sack in a stellar debut outing.

The Stallions converted 2 of 6 field goal attempts and registered 2 points on a safety to round out the scoring.  Tailback Matt Howe was the leading offensive player with 98 tough yards on 26 carries against a stout Sudbury front 7.  Quarterback Timothy Lennox came in for an injured Josh cook and completed 6 passes on 11 attempts for 89 yards.  He also rushed for a first down late in the fourth quarter.

Sudbury did get the ball back for two possessions in the last three minutes but could not sustain a drive against the stellar Stallions defence led by first year Coordinator Nik Alves.   The Stallions next game is this Saturday in Oakville against the 0-1 Titans.

The Huronia Stallions Junior Varsity team improved to 1-0 on the season with a 29-16 victory over the Sudbury Gladiators.  Offensively, the Stallions managed to complete only 2 passes with 3 interceptions.  However, the offence was able to ring up 4 touchdowns on the strength of a dominant running game led by a young offensive line.  Runningback Rhs Rusby scored a touchdown and eclipsed 100 yards rushing.

Justin Janicki added 90 yards rushing with another 2 scores.  Fullback Zachary Kuhn punched in for the other touchdown to round out the scoring.  The defence was led by the strong games of Linebacker Bradedon Butcher and Aiden Nicoletta.

The Stallions will look to move to 2-0 on Sunday against the 0-1 Titans in Oakville.

amilton then seized the initiative with three straight scores.  Kitchikake then hit receiver Brandyn Talbot for a 60 yard catch and score to cut the deficit to 7 points. Following a few key stops by the defence including an Alex Hill interception and an Isaiah Tabobondung and Gavin Wallin combined sack, Kitchikake found Liam Harrison for another deep touchdown strike to tie the game at 21.

Following another Hamilton touchdown, Huronia had the ball at the 40 with time for one more play before halftime. Kitchikake heaved up a deep pass to the end zone which Will McCulloch somehow came down with to tie up the game at 28 in a wild first half.

The second half turned into a bit of a defensive battle with both units coming up with big stops to keep the game tied until Kitchikake once again found McCulloch open on a 35 yard touchdown throw.   Kitchikake then iced the game with a touchdown run.  Kitchikake finished the day with 440 yards of offence and 6 total touchdowns in a spectacular performance.

The Bantams take on the 1-0 Oakville Titans in Oakville this Sunday at 11:00am.