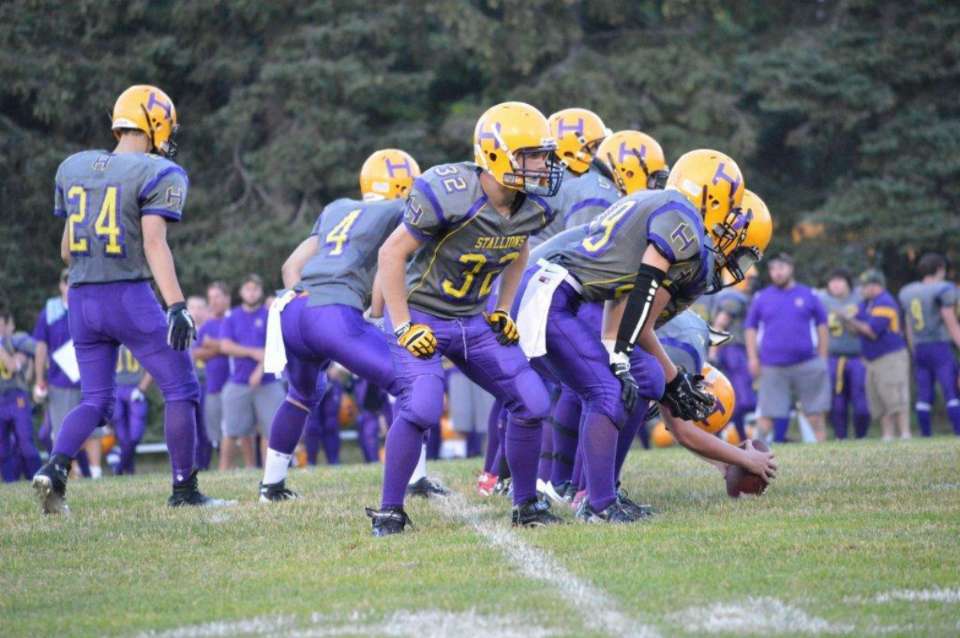 The Huronia Stallions Bantam team improved to 2-4 on the season and stayed in playoff contention with a big 47-7 victory over Vaughn.  Rhys Rusby had a game for the ages with over 400 yards of total offence, 6 touchdown runs and a touchdown reception.  He also had 3 long touchdown runs called back on penalties and sat out the entire fourth quarter.  Quarterback Adam Picard completed 5 of 7 passes with a touchdown and two long completions to Brandon Ransier.  The offensive line of Josh Comstive, Josh Carr, Jason Spray, Colin Rae and Curtis Gainey all played outstanding football. On defence, Aiden Nicoletta(2), Elijah Kent and Brendan Vieira all had interceptions.  Kail Dava was the leading defender with a quarterback sack and multiple tackles for loss. The Stallions next game is this Sunday in Oakville at 10 AM

The Huronia Stallions Varsity team improved to 6-0 on the season with a dominating 45-7 victory over Nipissing.  Quarterback Adam Zussino had his best game as a Stallion.  Zussino had 166 rushing yards on 12 carries with a touchdown and completed 10 of 15 passing attempts for 162 yards and a touchdown.  He made several plays scrambling for yards when the scheme broke down and rushed for 35 yards on a punt fake.  Tailback John Shields had 90 yards rushing on 16 carries and 31 receiving yards.  Tyler McLean also rushed for a touchdown.  Wide Receiver Dan Vandervoort had 4 receptions for 71 yards and a touchdown.  Brandon Viraugh had 3 catches for 50 yards and a touchdown.  The defence had an outstanding game led by Free Safety Brandon Johnston who had 2 key interceptions.  Defensive Lineman Matt Telford had several tackles and an interception. Austin Buck had 6 solo tackles and an interception. Linebacker Ryan Gallagher was the leading tackler with 8 solo tackles, several special teams tackles and an interception.  The Stallions final regular season home game is this Saturday at 6:30 against their North Division Rivals from Sudbury.

The Huronia Stallions Junior Varsity team snapped a three game losing streak with a big 41-0 victory over Vaughn.  The win moves the Stallions to 4-3 on the season.  The defence created several turnovers which was critical to the victory.  Dillon Martino led the way with a key interception.  Defensive back Tristan Huber had a strong game as did Linebackers Cam Yearwood and Kody Pain. Zach Hibbard played very well on special teams. Running backs Matt Howe and Alex Goldrich each had over 100 yards rushing.  Quarterback Andrew Gill threw 2 touchdown passes to Aiden Ramboran and Eugene Wold.  Receiver Devon Mcguirk rushed for a touchdown.  Jacob Tanguay kicked two field goals to round out the scoring.  The Stallions next game is this Saturday at 2:30 against Sudbury at the Barrie Sports Complex in Midhurst.  The game is crucial as the winner secures a playoff berth and third place in the Northern Conference.