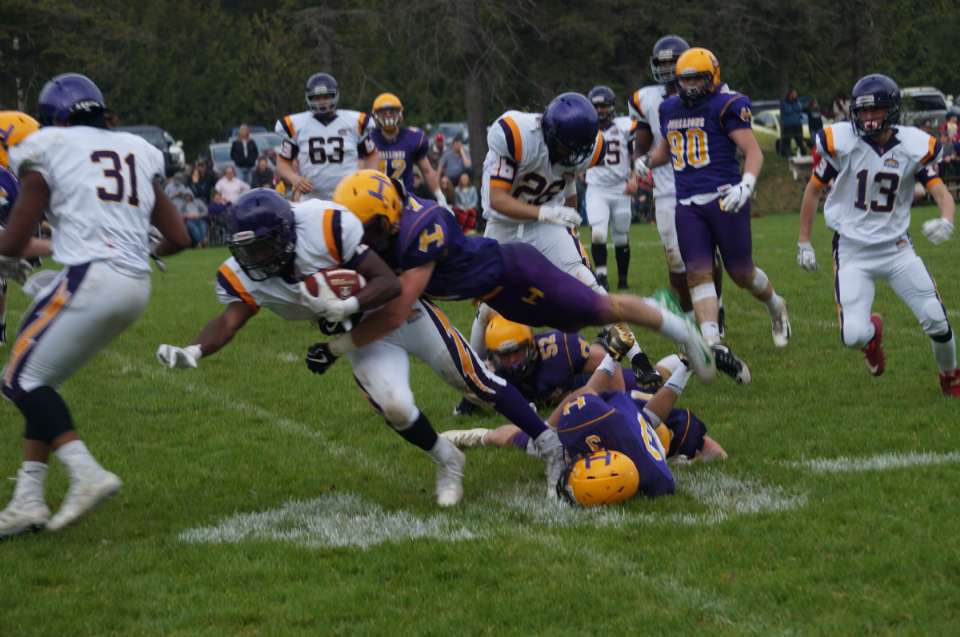 The Huronia Stallions Varsity football team defeated the Scarborough Thunder 14-7 to improve to 2-0 on the season. The win was significant for the veteran laded club who lost two close games including a playoff defeat to the Thunder last year. The game was a hard-fought and scoreless affair until the Stallions scored a late first half touchdown on a trick play. Quarterback Justin Winn threw a lateral hitch pass to receiver Will McCulloch who then fired a touchdown strike to a wide open Christian Maciag. In the second half, the Stallions offence did a better job of moving the ball which resulted in three field goal attempts. Jordan Travis connected on two of his three kicks with the miss resulting in a rouge to round out the scoring. Quarterback Justin Winn played well with 17 completions on 27 attempts for 206 yards with Maciag leading the receiving corps in both receptions and yardage.

The Huronia defence played an outstanding game on the strength of a suburb game plan by Defensive Coordinator Ed Shrubsole. The Thunder were held to under 100 yards rushing and did not move the ball with any consistency until a touchdown scoring drive on the final series of the game. The Stallions were led on defence by the strong tackling of linebacker Owen Macleod and by safety Julian DiSabatino who had several impressive pass breakups.

The Huronia Stallions Junior Varsity team fell to 1-1 on the season with a gritty 13-0 loss to the Scarborough Thunder. The defeat demonstrated a great deal of growth for the JV squad who yielded 72 points to the Thunder in their 2018 matchup. The young Stallions offence struggled to move the ball all game and could not establish the consistency they demonstrated in week one.

The Stallions defence kept Huronia in the game despite the Thunder’s sizable advantage in time of possession. They were led by the stellar play of rookie defensive ends William Gallant and Kyle Nesbitt who both did an excellent job keeping the edge on outside running plays and pressuring the quarterback on passing plays. Scott Labolt made several key tackles in his first game as a middle linebacker.

The Huronia Stallions Bantam team fell to 0-2 on the season after a 36-0 loss to the Oshawa Hawkeyes.  The young and struggling Stallions Offence was held scoreless for the second game in a row despite some fine receptions by receivers Jackson Gaffiero and Owen Fennell. The Stallions defence had trouble stopping the run despite the hard work by Jake Sheppard and Josh Barrett at the line of scrimmage and several key tackles by safety Sean Deasy

All three Huronia Stallions teams will travel to take on the Peterborough Wolverines this Saturday in a triple header showdown for the Cottage Cup. This trophy was created because of the rivalry between the organizations and is awarded each year to the program that wins two or more of the games. Last season, Huronia won the trophy for the first time in several years and are keen to keep possession of ‘the loon.’ The games will be played at Thomas A. Stewart Secondary School at 11 am (Bantam), 2pm (Junior Varsity), and 5pm (Varsity).