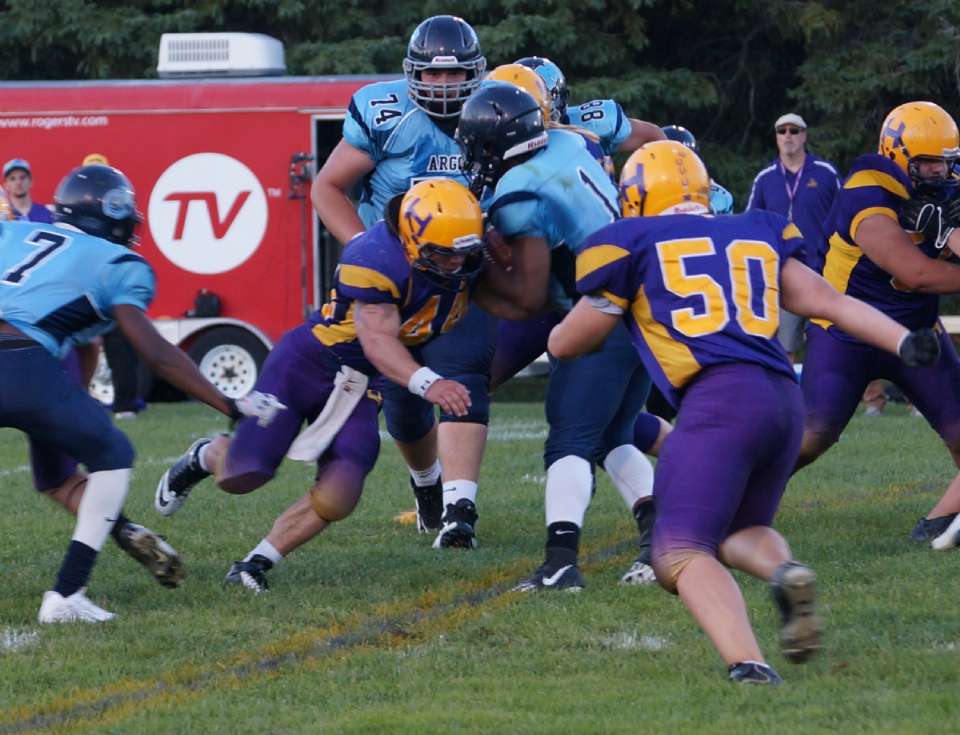 VARSITY
The Huronia Stallions Varsity team took on their northern rival the Sudbury Gladiators on Saturday with a berth in the Conference Finals on the line.  The Stallions entered the game riding a four game winning streak which they were determined to extend to five. Sudbury had just posted an impressive win over first place North Halton and were hoping to ride that momentum forward into the playoffs.  The Stallions started the game with a strong defensive stand forcing a Gladiators punt.  They followed that by hammering Sudbury with a ground attack led by tailback Matt Howe and fullback Jake Allen.  Howe scored the game’s first touchdown and finished with 12 carries for 100 yards and 2 scores.  Allen had 72 yards on just 4 carries.  Sudbury managed to keep the score tight early in the ball game with the Stallions holding a 14-7 lead midway through the second quarter.  This was extended by a Adam Zussino to Mitchell French touchdown throw and catch and a Devin Mcguirk field goal at the end of the half.  This gave the Stallions a 24-7 edge.  The intensity of the rivalry boiled over in the third quarter with several players on both sides sent to the sidelines by the referees to cool tensions.  The Stallions defence continued to stymie the Sudbury offence with a strong effort punctuated with key interceptions by graduating player Brandon Johnston and fellow all-star nominee Caleb Nunes.  Fraser Olson and James Ayers anchored the defensive line with Olson posting 4 tackles and Ayers posting 6 tackles and a quarterback sack.  Johnston and Allen were also the top Stallions players on Special Teams.  Quarterback Adam Zussino had an outstanding game with 12 completions on 17 attempts for 238 yards and 3 touchdowns.  The latter two touchdowns were caught by James Stevenson and Dylan Beck.  Sudbury scored a late touchdown but it was too little too late as the Stallions earned a 37-13 victory.  The Stallions will seek their fourth consecutive Northern Conference Championship this weekend on the road against North Halton.  They were embarrassed by the Crimson Tide in the regular season and are steadfast in their resolve to right that outcome and continue their Northern Conference dominance.

JUNIOR VARSITY
The Huronia Stallions Junior Varsity team lost a hard fought playoff decision to the Clarington Knights.  The Stallions had a strong game plan and executed early with quarterback Josh Cook connecting with Andrew Gill for the game’s opening score.  The drive was highlighted by a spectacular 43 yard reception by Jacob Tanguay.  However, Clarington managed to hold the Stallions scoreless for the rest of the game.  The Stallions trailed 11-7 at halftime and 18-7 early in the fourth quarter before ultimately succumbing 37-7.   Kody Pain and Steven Noble were the top defensive players for the Stallions with both players involved in several key tackles.  The JV’s succeeded in making the playoffs for an amazing seventh straight year and demonstrated continual improvement throughout the season.  The coaches are very excited about the number of returning players and the future contributions of graduates to the Varsity program.

BANTAM
The Huronia Stallions Bantam team advanced to the Conference Finals with a 41-8 victory over the Oakville Titans.  The Stallions seized control early in the game on the strength of a 52 yard touchdown run by Justin Janicki which was followed by a 65 yard touchdown run by Issachar Sookwah.  Charlie Doering, Bradlee Kitchikake and Nik Brennan had the other Stallions touchdowns.  The offence was led and managed effectively at the quarterback position by both Chase Waddick and Nikolaus Dejesus.  The Huronia defence stifled Oakville’s offence for most of the game by dominating the line of scrimmage.  Mitchell Stadnyk, Kail Dava and Dustin Ly were the top Stallion defenders.  The Stallions will play Peterborough on the road this Saturday at 4pm hoping to punch their ticket to the championship game.

The Stallions would like to thank all of their fans for their support during another wonderful campaign at the Barrie Sports Complex in Midhurst.