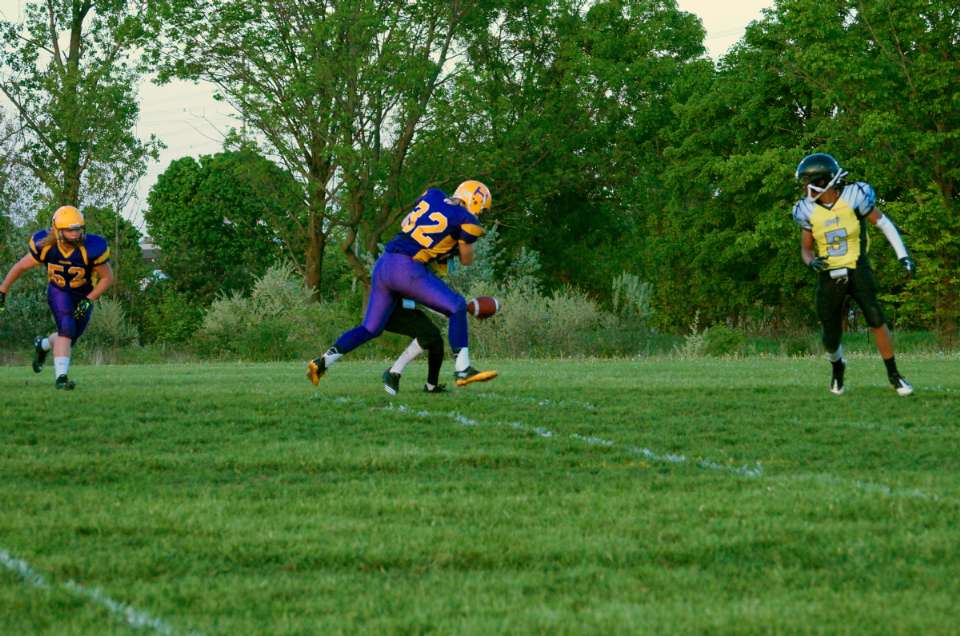 VARSITY
The Huronia Stallions Varsity Team got back on track with a 44-0 victory over the Clarington Knights.  The Stallions offence clicked all game because of a dominating performance by the offensive line which resulted in a total of 193 yards rushing.  This unit is expertly led by Coach Jeff Hale who is entering his 10th season with the Stallions Varsity and Junior Varsity programs.  Third year Varsity starting tailback John Shields set the pace with 92 yards and 2 touchdowns on 13 carries.  Matt Howe had 38 yards and a touchdown on 5 carries and Jake Allen rushed for the other score.    Wide Receiver Nick Stadnyk rushed for 44 yards and had 4 receptions for 71 yards and caught a touchdown pass from Quarterback Adam Zussino.  Devin McGuirk hit two field goals to round out the scoring.  The defence set the tone early when James Ayers scooped up a forced fumble and rumbled into the endzone to open the scoring.  Mac Holliday and RJ Folz had strong games to lead the defence.  The Varsity team’s next game is Saturday at 6:30 pm against Nippising at the Barrie Sports Complex in Midhurst.

JUNIOR VARSITY
The Huronia Stallions Junior Varsity team fell to 1-2 on the season with a 37-0 loss to the Clarington Knights.  The Stallions had 7 starters out and were hurt by an injury to key player Austin Durry.  They were also hamstrung by a continued inability to put points on the board in the redzone.  The top player in the game was receiver Andrew Gill.  The Juniors next game is Saturday at 2 pm against Vaughn at the Barrie Sports Complex in Midhurst.

BANTAM
The Huronia Stallions Bantam team improved to 3-0 on the season with a 38-14 victory over the Clarington Knights.  The Stallions were down 14-12 at halftime but dominated the second half for the win.  Chase Waddick led the offence with three touchdown passes.  Bradlee Kitchikake was the top rusher with two touchdowns.  Mitch Stadnyk and Brock Allen were the top receivers each hauling  in touchdown receptions.  The defence was sharp all game led by the play of second year bantam Kail Dava who was unblockable all day.  The team will try to improve to 4-0 this Sunday in Oakville.