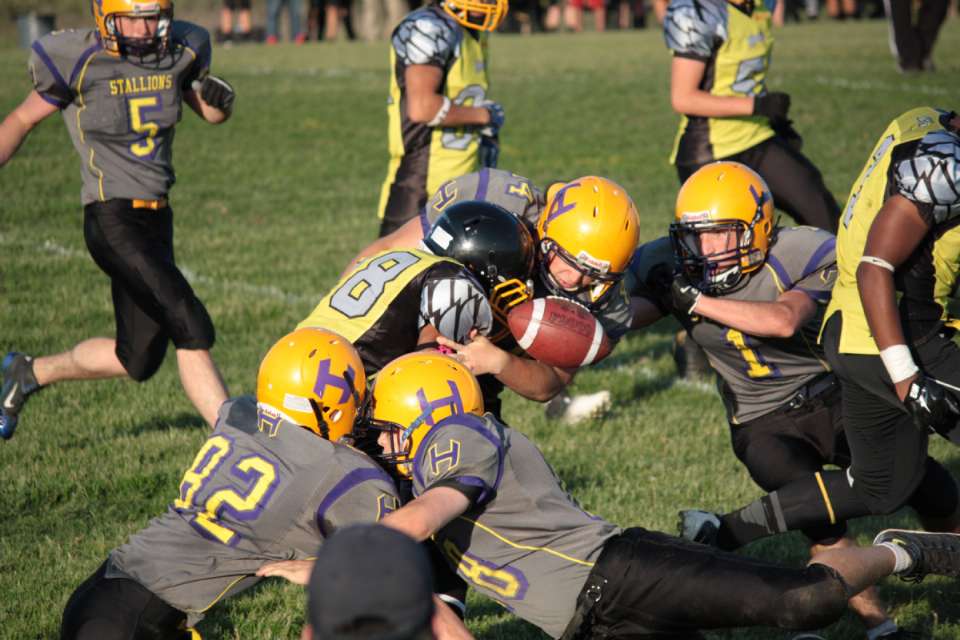 The Huronia Stallions Varsity team fell to 3-2 on the season with a 29-23 loss to North Halton.  The Stallions were unable to overcome an incredible individual effort by Tanner Cadwallader; the North Halton Quarterback.  Cadwallader rushed for 168 yards and 3 touchdowns on 11 carries before sustaining an injury at halftime.  He returned to game late in the fourth quarter to lead his team to victory.  Stallions Head Coach, Martino DiSabatino was blown away by the individual performance.  He stated after the game that Cadwallader “showed toughness in running over some members of the Stallions defence … and single handidly beat the Stallions.”  DiSabatino continued, “if I had not seen it with my own eyes I would not have believed it.”  Cadwallader almost scored a fourth touchdown with an electrifying 67 yard run on the final play of the half before Stallions defender Chris Mallo tackled him on the 7 yard line.  Stallion quarterback Adam Zussino almost matched Cadwallader punch for punch in a battle of the quarterbacks.  Zussino was determined to lead the Stallions to victory on his own rushing for 55 yards and 3 touchdowns and passing for 157 yards.  Tailback John Shields had a strong game with 23 carries for 109 yards.  The Stallions next game is Saturday against division rival Sudbury on the road.  A victory is crucial to secure a playoff position and home field advantage in the first round.

The Huronia Stallions Junior Varsity team defeated North Halton 21-6 to improve to 3-2 on the season.  It was a gutsy effort by the Stallions with 14 players out of the lineup in very humid conditions.  Geoanthony Varga had another 100 yard rushing performance and a touchdown before exiting the game in the third quarter with hydration issues.  Defensive back and team captain Christian Hutter-Coppin stepped up to run the ball while continuing to anchor the secondary.  Hutter-Coppin secured the win with the Stallions third touchdown on the day.  Steve Noble had a memorable game to lead the defence with several key tackles and 2 interceptions and Jacob Tanguay kicked a field goal to round out the scoring.  The Stallions next game is this Saturday in Sudbury with the Juniors also vying for a playoff position and possible home field advantage.

The Huronia Stallions Bantam team improved to 5-0 on the season with a shutout victory over North Halton.  Nik Brennan, Bradlee Kitchikake, Justin Janicki, Chase Waddack, Evan Harkless, Charlie Doering, Mitch Stadnyk and Dustin Ly all scored touchdowns to lead the offence.  On defence, Aiden Nicoletta (2), Brock Allen, Mitch Stadynk and Charlie Doering recorded interceptions.  The Stallions next game is this Sunday on the road against a tough Sarnia team.