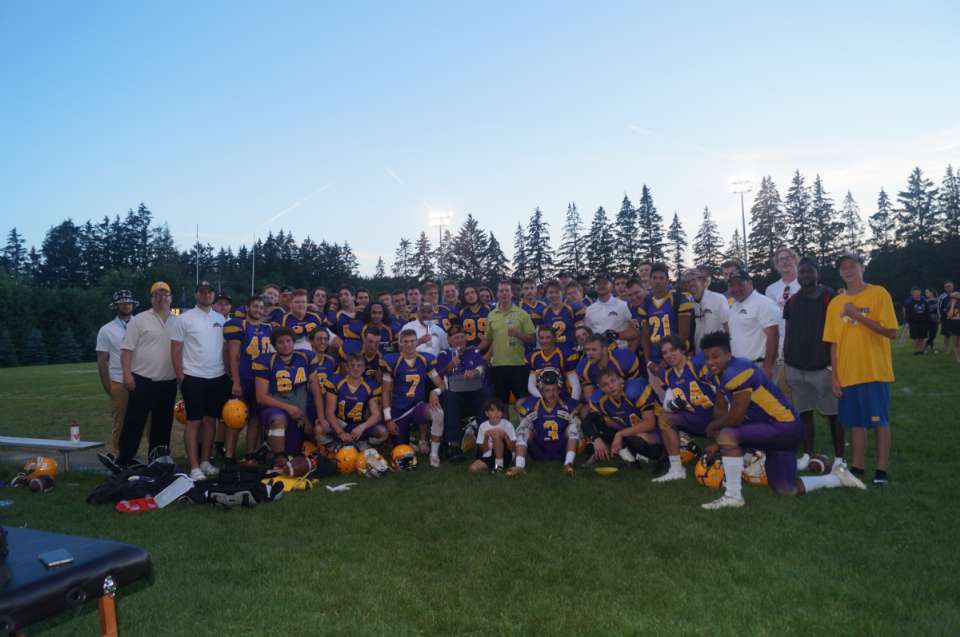 The Huronia Stallions Varsity football team improved to 5-1 on the season with a 29-14 victory over their rivals from Sudbury.  The Stallions faced an 11-0 deficit  after conceding two safeties and yielding a touchdown.  The Stallions scored a touchdown with under one minute to go in the first half to end a rocky opening half on a high note.  The game saw both teams commit several costly turnovers before the Stallions took control.  Head Coach Martino DiSabatino stated after the game that the key to the victory was the team coming away with points on two successful field goal attempts by kicker Michael Tomcyzk when the game could have went either way.  With the score 22-14, the Stallions iced the victory on a spectacular 70 yard touchdown catch and run by wide receiver Brandon Longstreet.  After the game, Longstreet described his emotions after scoring the game clinching touchdown in the team’s 25th anniversary celebration game declaring, “ It’s pretty surreal.  After it felt a little dreamy.”  He also described the team’s early game slow start stating, “You know – we did a little bit of day dreaming but then we got our stuff together and pulled out a really big W going into the postseason.”  Quarterback Justin Winn who finished 3/3 for 102 yards passing connected on the touchdown pass to Longstreet and also threw another score to receiver Cameron Hoekstra who finished with 3 receptions for 52 yards.  Quarterback Brandon Hyrncek also threw a touchdown pass to wide receiver Jaylen Cooper.  Justin Janicki was the team’s leading rusher with 7 carries for 78 yards.  On defence, free safety Christian Hutter-Coppin had four tackles and an interception.  Mitchell Stadynk and Jack Malo also had interceptions.  Derek Addy and Justin Defaria had quarterback sacks to round out the defensive highlights.  The Stallions have earned a first round bye in the playoffs and will host a playoff game in two weeks.

The Huronia Stallions Junior Varsity team defeated Sudbury 52-26 to finish the regular season with a 4-2 record.  The Stallions built a 14-7 lead in the first quarter and then broke the game open in the second as they took a 35-14 lead.  The Stallions offence was led by fullback Michael Cassano who had 3 touchdowns in a gritty performance.  Running backs Matt Koufis and Preston Howard also played well with Koufis also scoring a touchdown.  Quarterback Daniel Hawthorne demonstrated continued growth with another strong game which saw him throw 3 touchdown passes to add to the 5 he threw the week before.  Receiver Will McCullouch caught two touchdowns and also booted a field goal.  Receiver Brayden Harkness caught the other touchdown pass.  Young receiver Lucas Janicki is also coming along with strong performances as the season progresses.  Defensively, Lucas Smith had several key tackles and defensive back Liam McCarthy had an impact game.  Linebacker Jonah Leichner continues to impress the coaching staff with his hard work and enthusiasm for the game.  The Stallions will open the playoffs by hosting the 0-5-1 Vaughn Rebels this Saturday at 5 pm at the Barrie Community Sports Complex in Midhurst.  The Stallions defeated Vaughn 45-12 early in the season.

The Huronia Stallions Bantam football team lost their regular season finale 33-0 to the North Halton Crimson Tide to fall to 2-4 on the season.  The Stallions did earn a home playoff game this Sunday at 1 pm against the 0-6 Toronto Jr. Argos at the Barrie Community Sports Complex in Midhurst.  The Stallions defeated Toronto 27-0 earlier in the season.

The Stallions would like to thank all the staff at the Barrie Community Sports Complex (BCSC) for their efforts over the years and the fantastic working relationship which has been in place since the park opened.  The fields and facilities are top notch and continue to improve and be tailored to the needs of the Stallions organization.