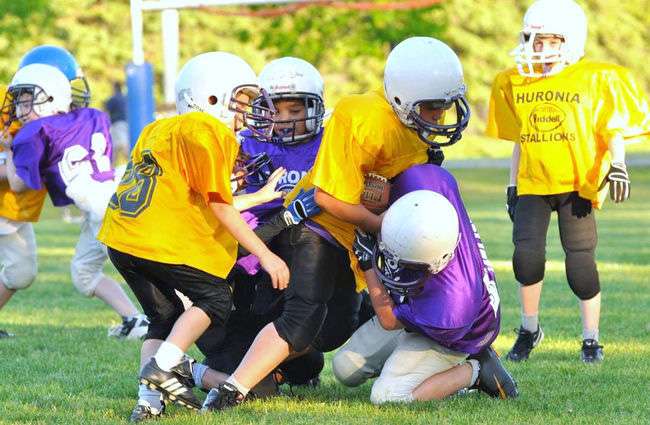 
The Huronia Stallions are chomping at the bit to start training camp Thursday, excited to emerge from a long winter to battle Ontario’s top football teams.

“The Stallions (varsity) program has been among the best in the province since 2006,” said Romisher, who was a Stallion from 1996-98, before moving into the coaching ranks from 1999 to 2010. “The (varsity team) has had a run of seven playoff appearances in eight years; the team has won three consecutive Northern Conference titles and … (last year), the team come within three points of a provincial championship.”

The bantam Stallions won championships from 2004 to 2006, while the junior varsity team won titles in 2004 and 2005, Romisher said of the teams’ success in the Ontario Football Conference.

“The calibre of the league is outstanding,” he said. “Both the junior varsity and varsity divisions play three-down football, so the passing game and special teams really develop.”

And while winning is the goal, Romisher stressed there’s more to the program than scoring touchdowns and racking up victories.

“The Stallions value personal character above all else and the coaches like to say being a Stallion does not build character, but reflects it,” said Romisher. “Responsibility, selflessness, self-sacrifice, respect, teamwork, perseverance and pride are the values that are nurtured consistently throughout the program.”

That philosophy has helped build the Stallions program. It has grown from 28 players at the varsity level in 2008 to more than 400 players ages seven to 19 today.

The foundation of that growth is the club’s house-league program. The Stallions have three Orillia-based house-league teams: Colts (ages 13 to 14), Ponies (11 to 12) and Mustangs (eight to 10).

“Our house league is unique as there are no referees and no scores are kept. The vision is to build a love for the game at a young age in a non-competitive atmosphere,” said Romisher.

House-league co-ordinator James Smith said the philosophy of the program is centred on player development.

“We emphasize football fundamentals in a non-competitive, friendly environment,” Smith said, noting there are two weekly practices and a controlled scrimmage each week against a Barrie-based house-league squad. “The goal of our program is to have every player walking off the field feeling great about themselves and what they have accomplished. The essential skills and fundamentals a player learns during practice are then put to use during the controlled scrimmages.”

He said controlled scrimmages are about development and fun.

“Personal development and an appreciation for a sport does not have to be determined by wins, losses, touchdowns or tackles,” said Smith. “We encourage our players, parents and coaches to stay true to this non-competitive philosophy.”

It’s a strategy that has paid dividends. Romisher said 87% of Stallions in the rep program come from the house-league system. Many of those rep players, like Romisher, return after their playing days to help coach.

“Throughout the program’s history, former players have returned to give back to the Stallions family and help build the next generation,” said Romisher.

Smith said new players would be welcome to join that new generation of Stallions.

“Because the philosophy is about fundamentals, we are very inviting for newcomers and love to see new faces,” Smith said, noting cost for the house-league season, which runs from early May until late July, is $360. “The house-league program is a great way to introduce your child to the sport of football and provide them with a great opportunity to develop both athletically and personally.”

The Stallions have become a breeding ground for Canadian universities as well. Orillia’s Brandon Johnston is the latest among more than 100 Stallions to go on to play football at the university level when he was recruited to Acadia University, where he will begin play this year.

“We take great pride in the number of former players who go on to attend post-secondary studies, whether as students or student athletes,” said Romisher, who noted universities heavily scout the league — a productive feeder source for their programs.

“To see many of our players advance to the CIS (Canadian Interuniversity Sport) level and have the opportunity to receive an education and play a sport they love is icing on the cake,” said Smith. “The successes and recognition many of our players are receiving on and off the field, in various walks of life, are a great testament to the program, the coaches and the quality of youth that are in Simcoe County.”

In addition to Johnston, former Orillia tailback John Shields is currently at St. Francis Xavier University, while their fellow former Park Street Collegiate Institute teammate, Matt Telford, a standout with the Stallions, is not playing football, but is a full-time student at Queen’s University.

While the program is regional in scope, it was founded and is still run by Orillia’s Martin DiSabatino, and coaches such as Clint Uttley (now head coach of McGill University), Taylor Shadgett, Josh Lambert and Jeff Hale all hail from Orillia.

For more information on the club, its 20th-anniversary celebration June 16 or team schedules, visit huroniastallions.on.ca.