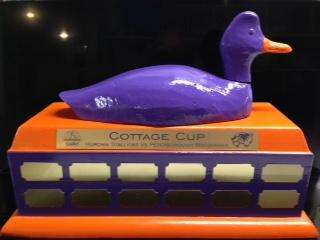 VARSITY
The Huronia Stallions Varsity team lost a last second 23-16 decision to the Toronto Junior Argos to fall to 2-2 on the season.  In the first half, the Stallions offence committed multiple offensive miscues with four fumbles on basic Center-Quarterback exchanges.  The Stallions defence was also rattled as the Junior Argos shredded the Stallions pass defence.  Despite the offensive disarray and defensive incapacity, the Stallions were only down 20-8 at halftime.  In the second half, the Stallions defence responded in a big way led by Linebacker Datun Atekepe who had six solo tackles, two sacks, a blocked PAT and an interception.  The Stallions offence started to click as the offensive line dominated the line of scrimmage and opened holes for Running Back Devin McGuirk who finished with two touchdowns.  In the fourth quarter, backup Quarterback Brandon Hryncek completed several passes to Wide Receivers Cameron Hoekstra and Nick Stadnyk to set up a dramatic finish.  The Stallions, down seven with 2.5 seconds to go advanced the ball to the Argonauts three yard line but were unable to run it in for a shot at a tie or victory on the ensuing convert.

JUNIOR VARSITY
The Huronia Stallions Junior Varsity team improved to 4-0 on the season with a 32-13 victory over the Toronto Junior Argos.  The Stallions started with poor field position the whole first quarter as Toronto took an early 6-0 lead.  In the second quarter, the JV Stallions settled down and began to take control of the game.  Running Back Justin Janicki once again had a strong game with a touchdown and over a 100 yards rushing.  Fullback Bradlee Kitchikake punched in a touchdown as well.  The Stallions defence made several big plays led by Defensive Back Julian Di Sabatino who had two interceptions-one of which he returned for a touchdown and a blocked field goal.  Linebacker Owen McLeod also scored  a touchdown on an interception to round out the scoring.

BANTAM
The Huronia Stallions Bantam team won their second straight game to improve to 2-2 on the season with a stellar 46-18 victory over the Toronto Junior Argos.  Joshua Robinson was the player of the game scoring five touchdowns!  Bailey Swift had a 60 yard touchdown scamper and Ryan Rogers had a 40 yard touchdown.  The Stallions defence played well overall with Logan Smith providing the defensive play of the game with a 40 yard touchdown return.

The Stallions will host a triple header against Peterborough this Saturday at the Barrie Sports Complex in Midhurst.  The game times are as follows: Varsity 7:30 pm, Junior Varsity 3:30 pm, Bantam Noon.   The Stallions and Wolverines have created a trophy called the Cottage Cup to enhance their burgeoning rivalry.  Whoever wins at least two of the three games this Saturday will take home the Trophy for the year.  The teams regularly meet in the playoffs with Peterborough defeating the Varsity team in last year’s Conference Semi-Finals for their first ever win against the Varsity squad.  Traditionally the Bantam and Junior Varsity divisions have seen Peterborough dominate with the exception being last year’s Bantam Stallions team that won the Northern Conference.