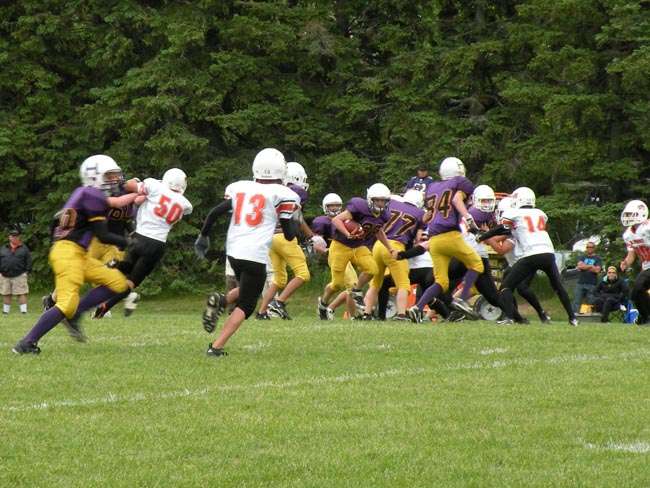 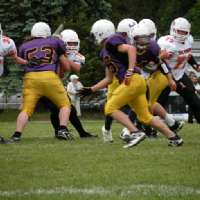 The Stallions took a 14-3 lead in the first half spurred by two forced fumbles by impact rookie Linebacker Zach Hellreich.  Tailback Gary Smith opened the scoring with a 25 yard touchdown scamper followed by a one yard QB sneak by Quarterback Tivon Cook.  Wide Receiver Justin Alexander was the top player on offence with 3 receptions for 103 yards including an incredible one handed grab that set up Cook’s touchdown.  The Predators scored three touchdowns in the third quarter to take the lead.  Justin Alexander caught a 31 yard touchdown pass from Cook to pull the Stallions close.  However, the game ended with the Stallions falling just short of their first victory of the year.  Halfback Dylan Farrington was the top defender with 11 total tackles.  Veteran Defensive Back Jordan Bodnaruk added an interception for the Stallions.  The team’s next game is Saturday June 25 at 6:30 against Sudbury.

The Huronia Stallions Junior Varsity team improved to 2-1 on the season with a 51-6 thrashing of the Clarington Knights.  Tailback Jayden Kelly scored an early touchdown with some spectacular runs.  Sam Nieuwhoff had 2 rushing touchdowns and Adam Zussino, Jesse Nelson, Tyler McClean and John Shields also added scores.  Ryan Gallagher, Trevor Gerberg and Dana McCardle led the defence with strong performances.  The Stallions next game is Saturday June 18th in Toronto.

The Huronia Stallions Bantam team improved to 1-2 on the season with a dramatic 20-14 victory over Peterborough.  The Stallions jumped out to an early lead with a 50 yard Matt Howe touchdown run on the first play from scrimmage.  Dylan Martyn then had an electrifying 60 yard punt return touchdown.  Howe busted another long run to give the Stallions a 20-0 advantage.  Peterborough fought back with two touchdowns to give themselves a shot to win the game in the final minute.  Defensive Tackle Cayden Trensch then had a clutch quarterback sack on the final possession that set up James Aube’s game clinching interception.  The Stallions next game is on Saturday June 18th in Clarington.