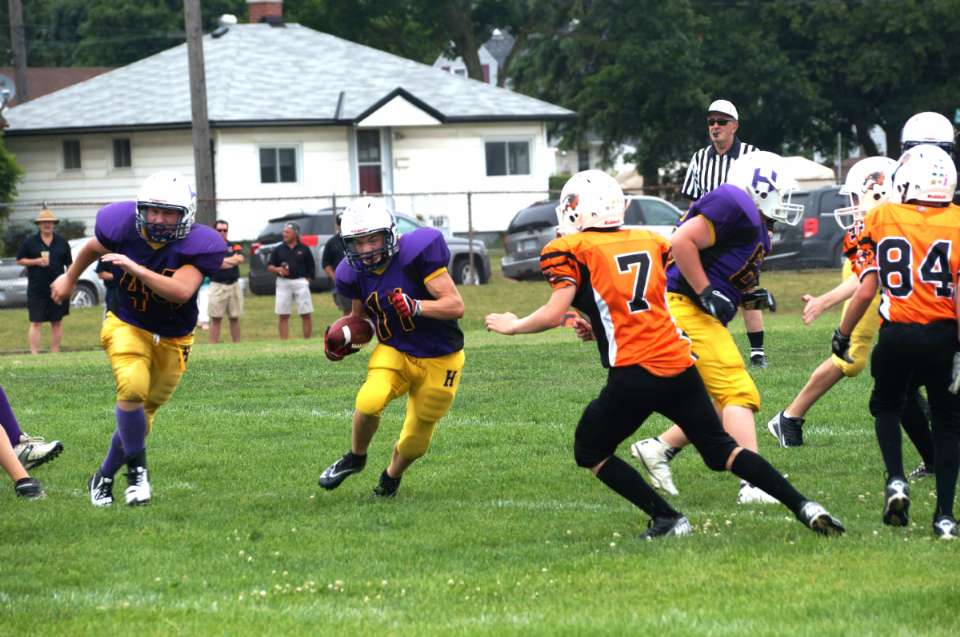 The Huronia Stallions Varsity Football Team defeated Oakville 34-12 in the opening round of the playoffs.  The game began tentatively for both sides as each offence failed to generate any significant yardage.  Defensive End Hayden Hughes then took matters into his own hands by knocking down a lateral pass and scooping it up for a 45 yard Stallion touchdown. Hughes has made plays like this throughout the season.  The Stallions Defensive Line consisting of Hughes, Mack Holliday, Matt Telford, Brett Ferrari, Thomas Rocks and RJ Foltz turned out to be the difference in the game.  They dominated the line of scrimmage and wrought havoc on the Oakville passing game.  Holliday had 6 tackles and 3 quarterback sacks and Telford had 5.5 tackles and one sack.  Following Hughes’ touchdown, Adam Zussino hooked up with Dan Vandervoort on a deep pass that resulted in a 59 yard touchdown pass and run to make the score 14-0.  Tailback John Shields scored a first half touchdown and Andrew Drysdale kicked a field goal.  Oakville managed to score twice in the first half to keep the game a close 24-12 at the half.  The Second Half was all Stallions as the defence completely shut down Oakville and Shields rumbled in for another score for a comfortable cushion.  Shields finished the game with 17 carries for 105 yards and Zussino was 9-17 for 161 yards.  Vandervoort led the receivers with 70 yards receiving, followed by Brayden Viragh with 48 yards and Brayden Parker with 23 yards.  The Stallions will take on Peterborough this Saturday at 3PM at the Barrie Sports Complex in Midhurst with a berth in the league Championship on the line. They are hoping to earn their third straight Northern Conference Playoff Title.  This will be the final home game for the following graduating players: Dan Vandervoort, Andrew Drysdale, Matt Telford, Kent Blackman, John Stylianou, Johnny Obdam, Avery Pope, Chris Maybee, Hayden Hughes and Brett Ferrari.

The Huronia Stallions Junior Varsity Team lost their quarterfinal playoff game 40-24 to North Halton.  The game followed the same script as their earlier meeting with the Stallions surging out to an early lead followed by a strong North Halton second half response.  In this game, the Stallions galloped ahead 17-7 with a minute left in the first half on the strength of two Matt Howe touchdowns.  North Halton managed to score on a one minute drive on the last play of the half to swing the momentum back in their favour.  North Halton controlled the field position in the second half to earn the playoff win.  Howe was the top offensive player with 150 yards of offence and Jacob Johnson and Jack Schneider were the Stallions top defenders.