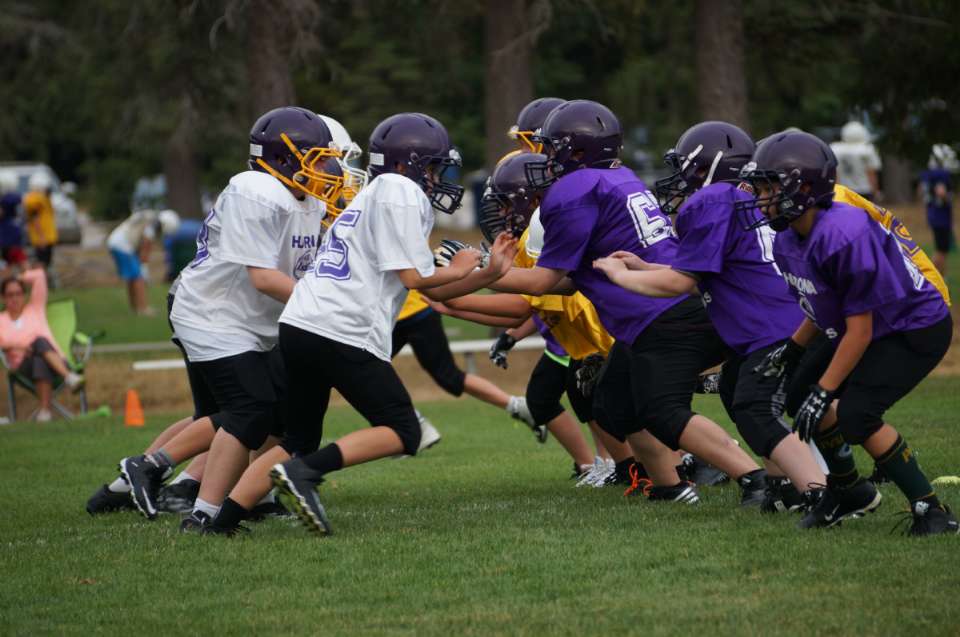 The Huronia Stallions Varsity team are now 4-2-1 on the season after earning a 13-13 tie with the undefeated and first place Scarborough Thunder.  The Stallions fell behind 6-0 after the Thunder returned an early punt for a touchdown.  The first half was a hard-hitting defensive battle with both teams struggling to find any success offensively.  The Stallions finally put together a drive that resulted in a field-goal by Will McCulloch.  In the fourth quarter, the Thunder finally completed a downfield pass that gave them some excellent field position and were able to punch in a touchdown by using a Tight End and running off-tackle.  The Stallions then came to life offensively in the final seven minutes of the game and were aided by several Thunder penalties.  Michael Cassano punched in a short touchdown run and McCulloch booted his second field goal for scores on back to back possessions to tie the game.  The Stallions defence adjusted to the Thunder’s heavy package and shut them down once again for the rest of the contest.  With under a minute to play the Stallions got possession and were gifted a short field due to two Thunder unsportsmanlike conduct penalties.  At the Thunder 25-yard line – they elected to punt for a one-point rouge but were unable to make the tackle in the endzone.  A reeling Thunder squad then kneeled to kill the clock content to escape with a tie after collapsing late in the quarter.  The Stallions were led on defence by Zechariah Willems, Gavin Wallin, and Andy Shrubsole who all had quarterback sacks.  Owen Macleod and Charles Doering both played hard-nosed football at the Linebacker position and rookie Cornerback Josh Flindal had some key tackles in the secondary.  On offence, Issachar Sookwah put forth a tremendous effort rushing for tough yardage against a very stout opponent. Alongside his two field goals, Will McCulloch did a fantastic job keeping the dangerous Thunder returns at bay with some skilled directional punting.

The Stallions can secure a playoff spot with a road win over the 6-1 Oshawa Hawkeyes in their regular season finale this Saturday or with a loss by the 4-3 Toronto Jr. Argos who play the Scarborough Thunder.  The Stallions will know the result of the Argos-Thunder game by kickoff.  The Stallions have a long association with the Hawkeyes but have not played them since joining the OFC in 2011.  Oshawa, Huronia, and Mississauga were the three founding organizations who kickstarted summer league football for high school age players in 1993.  The three team-league was won by the Stallions in its inaugural year making this matchup an ‘Original Three’ rivalry game.

The Huronia Stallions Junior Varsity team lost 48-1 to the Scarborough Thunder to fall to 2-5 on the season.  The game was never competitive with the Thunder scoring 42 points in the first half.  The lone Stallion point came on a missed field goal that sailed through the endzone.  The Stallions will look to finish the season strong against the 5-2 Oshawa Hawkeyes this Saturday on the road.

The Huronia Stallions Bantam squad lost a high-scoring contest 70-34 to the Scarborough Thunder.  The Stallions have now lost three games in a row to drop to 4-3 on the season.  The Thunder jumped out to a 28-0 lead in the first quarter with next to no resistance from the Stallions.  The Stallions rallied and showed a lot of grit and determination by scoring three touchdowns in the final five minutes of the first half.  They were not able to make the game competitive in the second half but kept working hard and competed until the final buzzer.  Mackenzie Jackson was the top offensive player with several skilled receptions and a touchdown catch.  Quarterback Will Howard accounted for three touchdowns with two rushing.  Running Back Ethan Travis reached the endzone twice to round out the Huronia offensive highlights. The Stallion defence could not contain the shifty, spinning Thunder Running Backs and were undone by poor tackling and outside contain.     The Stallions have clinched a playoff position and are locked into fourth as they have the tiebreaker against Peterborough.  They will hit the road against the 6-1 Oshawa Hawkeyes this Saturday hoping to get some momentum going into the playoffs.