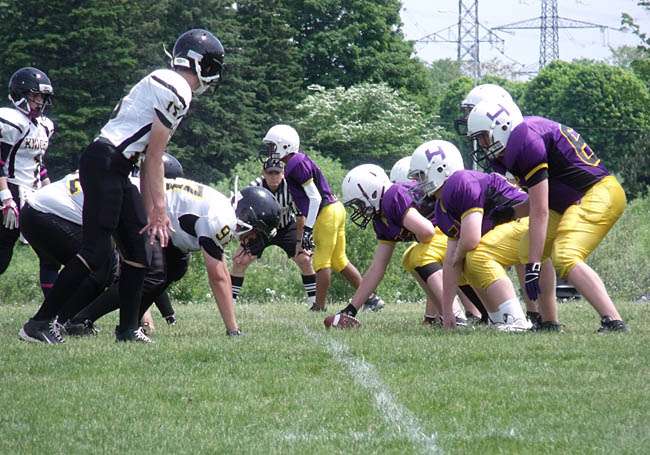 VARSITY
The Huronia Stallions Varsity Team posted a 29-7 victory over the Forest City Thunderbirds.  The Stallions were led on offence by Quarterback Tivon Cook who completed 19 of 28 passes for 342 yards, 4 touchdowns and 3 interceptions.  Rookie Slotback Adam Zussino posted 6 receptions for 134 yards and 2 touchdowns.  This was Zussino’s first career start at receiver, having played Quarterback in Junior Varsity and high school.  Veteran receiver Eric McCrea had 6 receptions for 100 yards and Connor Maxwell and Jesse Alvez both caught touchdown passes.  The defence was led by Linebacker Zach Keough who had 10 total tackles and 2.5 quarterback sacks.  Linebacker Ryan Gallagher also had a strong game with 7 total tackles and a fumble recovery.  Cornerback Johnny Obdam had an interception that he returned 24 yards to round out the highlights.  The Stallions next game is this Saturday in Clarington at 1 PM.

JUNIOR VARSITY
The Huronia Stallions Junior Varsity Team lost a thrilling game to Clarington this weekend.  The Stallions were down 1 point with seven seconds left and elected to run a play and go for the win versus punting for the single to force overtime.  The play was unsuccessful leaving the Stallions on the wrong end of a 14-13 decision.  Matt Howe led the offence with two touchdowns and 108 hard earned rushing yards.  The defence was led by Trevor Gerberg and Matteo Berticci.  Defensive Back Trevor Wong had an interception for a touchdown called back due to an illegal block.  The Stallions next game is Sunday June 3 at 4 PM in Burlington against the Stampeders.

BANTAM
The Huronia Stallions Bantam Team lost a hard fought defensive battle to the Clarington Tigers 8-0.  Jack Schneider and Zac Guymer-Jacobs led the defence with Zac Creamer and Christian Hutter-Coppin putting forth strong offensive efforts.  Alex Goldrich was the top Special Teams player.  The Stallions travel to Hamilton this Sunday where they hope to get a victory and some momentum.