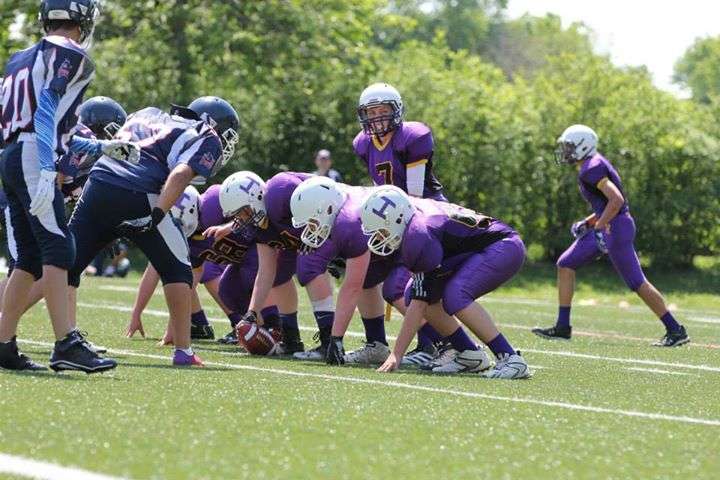 VARSITY
The Huronia Stallions Varsity team improved to 3-1 on the season with a hard fought 27-10 victory over the winless Nipissing Wild.  The Wild were a strong opponent having lost two games by less than a touchdown and putting up lots of points on the season.  The game was tight throughout the first half with the Stallions offence sputtering due to a lack of execution.  The spark that turned the game in their favour was a spectacular late first half 115 yard punt return touchdown by speedster Jayden Kelly.  The Stallions then rolled to three more scores before the half on the strength of a 32 yard Adam Zussino to James Stevenson touchdown throw and catch and 2 clutch field goals by Devin McGuirk.  This gave the Stallions a 20-0 halftime lead which was too much for a game Nipissing squad to overcome.  The defence was led by Linebacker Terrell Cook who had a breakout game with 6 solo tackles, 4 assists, a batted ball and several special teams tackles.  Cook has been undone by injuries the past two seasons but is now healthy and earned his first start this week in over a year.  The Stallions travel this weekend to North Halton to take on the 4-0 Crimson Tide.  This game has huge playoff implications as the victor will be in first place and gain the tie breaker.

JUNIOR VARSITY
The Huronia Stallions Junior Varsity team snapped their two game losing streak and improved to 2-2 on the season with a 49-28 victory over the Vaughn Rebels.  The Stallions offence failed to capitalize on two early redzone drives before Tailback Geoanthony Varga broke out for a five touchdown, 235 yard performance!  Christian Hutter-Coppin played well and punched in the 6th Stallions rushing touchdown on the day.  Jacob Tanguay successfully made all 7 converts and caught a touchdown pass from Quarterback Josh Cook to round out the scoring.  The defence came up big in the first half holding Vaughn to zero points on three trips inside the Stallions fifteen yard line.  Jacob Johnson and Jacob Bangarol were the Stallions top defensive players.   The Stallions next game is this Saturday on the road at North Halton.

BANTAM
The Huronia Stallions Bantam team overcame an early 14-0 deficit to improve to 4-0 on the season with a 40-28 victory over the Oakville Titans.  The Stallions Offensive Line composed of Aden Alfieri, Josh Carr, Josh Comstive, Jon VanShurbert and Curtis Hershey dominated the line of scrimmage which resulted in six rushing touchdowns.  These were scored by Issachar Sookwah(3), Mitch Stadnyk, Bradlee Kitchikake and Justin Janicki. The defence was led by the steady play of second year defensive backs Aiden Nicoletta who had double digit tackles on the day, Brock Allen and Owen Bond. The Bantams next game is this Sunday at 1pm against North Halton at the Barrie Sports Complex in Midhurst.