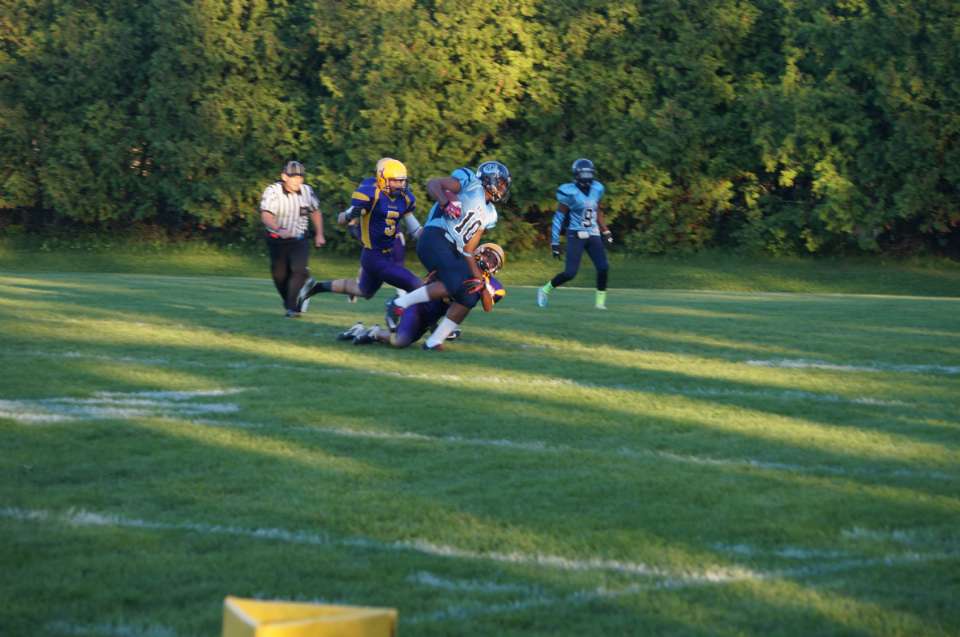 Varsity
The Huronia Stallions Varsity team won a thrilling 42-30 shootout over the Toronto Junior Argonauts to improve to 5-2 on the season.  The score went back and forth all game until a big third down stop by the Stallions in their own end was followed a few series later by defensive back Caleb Nunes’ game clinching interception for a touchdown.  In defeat, Toronto’s Treyion Charles was the player of the game.  Charles amassed an incredible 270 combined rushing and receiving yards which included two highlight real touchdown runs.  The Stallions were led on offence by tailback John Shields who slashed through the Toronto defence with 18 carries for 160 yards and 2 touchdowns.  Quarterback Adam Zussino had an impressive and mistake free game completing several passes in key situations and extending drives by scrambling for first downs.  Zussino totaled 105 yards rushing on 6 carries and also passed for 157 yards and touchdown to wide receiver Dylan Beck.  Beck had a strong game with 2 key catches and several solid blocks to extend downfield runs by the Stallions backs.  Terrel Cook recovered a fumble for a touchdown and Devin McGuirk kicked two field goals to round out the scoring.  The Stallions were led defensively by the outstanding play of Brandon Johnston, Caleb Nunes, Max Malo, Dylan Martin and Austin Currie.  In his first game back from injury Martin contributed 6 tackles, while Johnston and Currie had 9 tackles each and Malo continued his steady play with a key interception.  The Stallions next game is this Saturday at 6:30 pm at the Barrie Sports Complex in Midhurst where they will face Peterborough in the regular season finale.  The Stallions will earn home field advantage in the first round of the playoffs with a victory or a Toronto loss.

Junior Varsity
The Huronia Stallions Junior Varsity team won their fourth consecutive game 36-12 over Toronto to improve to 5-2 on the season.  Jacob Tanguay had one of the finest individual performances at the Junior Varsity level in Stallions history.  Tanguay caught a touchdown pass, returned a punt for a touchdown and kicked four field goals including a 47 yarder.  I do not recall any Stallions player at any level converting on a field goal of that length in game action.  Hayden Greenly rushed for a touchdown to round out the scoring.  The top defensive player was Kody Pain who had several key tackles.  The Stallions next game is this Friday at 8 pm at the Barrie Sports Complex in Midhurst.  The Stallions will be taking on the first place Peterborough Wolverines and the game will be filmed by Rogers Television.

Bantam
The Huronia Stallions Bantam team fell to 5-2 on the season with a 36-6 loss to the undefeated Peterborough Wolverines.  The Stallions played Peterborough tough, holding them to 15 points in the first half until they yielded a critical scoring drive in the last minute of the first half.  The Stallions offence came to life in the second half led by the rushing of Nik Brennan and Bradlee Kitchikake.  First year Bantam quarterback Nick Dejesus connected with receiver Mick Tomcyzk for the lone Stallions touchdown.  Slotback Kail Dava had two skillful receptions which included a one handed effort in double coverage on fourth down.  Joshua Comstive was the top linemen and Issichar Sookwah and Justin Janicki were the leading defenders.  The Stallions next game is this Saturday at 2 pm at the Barrie Sports Complex in Midhurst against the Clarington Knights.