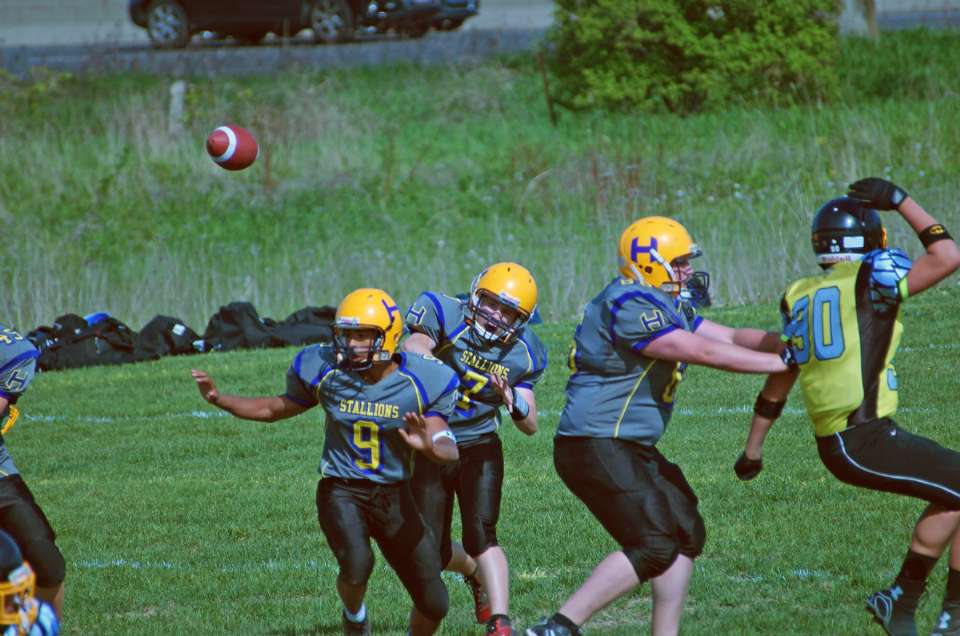 VARSITY
The Huronia Stallions Varsity Team fell to 1-1 on the season with a 50-14 defeat at the hands of the Burlington Stampeders.  Burlington took it to the Stallions from the opening whistle with the outcome never in doubt.  The Stallions could not respond to the Stampeder onslaught suffering dropped balls on offence and missed tackles on defence.  Matt Howe and Nick Stadnyk accounted for the two Stallions touchdowns.

JUNIOR VARSITY
The Huronia Stallions Junior Varsity Team fell to 1-1 on the season with a 41-10 loss to the Clarington Knights.  The Stallions played the Knights even for most of the first half with the highlight being a 51 yard touchdown connection between Quarterback Josh Cook and Wide Receiver Jacob Tanguay.  This gave the Stallions a 7-6 lead with less than a minute left in the half.  After a 15 yard penalty for excessive celebration, Clarington returned the ensuing kickoff for a touchdown to lead 13-7 at the half.  Both defences played tough in the third quarter with Clarington ahead at the beginning of the fourth by a 20-10 score.  Clarington then seized control of the momentum sending the Stallions to their first defeat of the season.

BANTAM
The Huronia Stallions Bantam Team improved to 2-0 on the season with a 34-0 victory over the Vaughn Rebels.  The Stallions seized momentum early on the strength of two early touchdown runs by Mitchell Stadnyk.  Quarterback Chase Waddick had a strong game also accounting for two touchdowns.  Receiver Evan Harkness connected on one of the Waddick touchdowns hitting the endzone with a spectacular leaping catch.  Ish Sookwah spun through defenders to account for the other score.  Carter Stevens, Owen Macleod, and Gavin Wallin were the top defensive players.  All three are in their fourth season with the Stallions organization.

The Varsity, Junior Varsity and Bantam Stallions are all in Clarington for a triple header this Saturday.